Mercedes-Benz made World Rally history with the SLC in a remarkable feat 40 years ago this week. 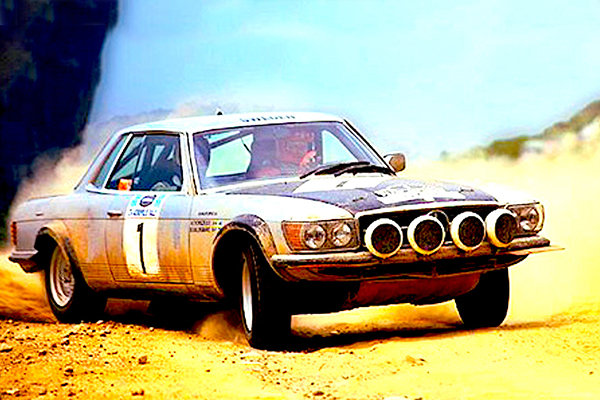 When you think of late 1970s and early ‘80s world rally winners, what springs to mind? Screaming Ford Escort RS1800s and Fiat 131 Abarths, the sensational Lancia Stratos and then the beginning of the Audi quattro are likely candidates.

But there were exceptions, and this has to be the most bizarre of the lot. Did you know that the Mercedes Benz SLC twice won the Ivory Coast World Championship Rally in 1979 and ’80? And that it was basically a production car with a standard automatic gearbox?

Mercedes had a World Rally Dream. But No Weapon
Back in 1978 and still under the self-imposed ban on circuit racing following the 1955 Le Mans disaster, Mercedes-Benz was looking to expand its rally efforts. It however faced a bit of a quandary as it did not have a nimble little sedan in its range. What it did have was the 450SLC — that quite expansive, heavy and expensive C107 SLC coupé — something more of a boulevard cruiser than a world rally weapon.

Merc execs scratched their heads and ultimately decided that whatever happened, a bit of rallying would not be bad a bad thing for the big V8 coupé’s image

The project was entrusted to Erich Waxenberger, who was tasked to turn the flagship 450SLC into a competitive rally machine. And if the tenet of rallying a 450SLC was not wacky enough, the rally cars were powered by the standard 227 hp single overhead cam M117 4.5-liter V8. And the standard production 722.0 three-speed slush-box automatic gearbox!

Many Smiled on Learning of the Project
Of course, the team added the likes of skid plates, extra lights, a roll cage and all the mandatory safety kit. Many smiled on hearing of the project, some sniggered. But before too long, the smiles would be on the other side of those faces. 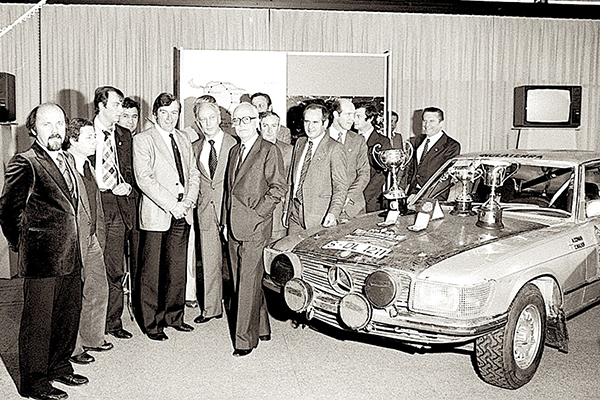 A Dream Debut as SLC Dominates Against All Odds
The team entered a trio of its new rally 450SLCs into 20,000-mile Vuelta a la América del Sud — or lap of South America. They were up against a horde of rally Fords, Fiats and the rest. Against all odds however, Andrew Cowan and Colin Malkin led Sobieslaw Zasada and Andrzej Zembrzuski home in a Mercedes-Benz 450SLC 1-2, with Timo Makkinen and Jean Todt fourth in another SLC.

Mercedes-Benz had come, seen and conquered as the 450 SLC scored a totally unexpected debut rally victory.

Buoyed by its success, Mercedes-Benz ramped up its 450SLC rally effort up as it prepared a new 290 hp 5-liter version of E50 the M117 for FIA Group 4 World Rally Championship competition. The new rally cars gained an aluminum hood, trunk lid and doors, which cut 125 pounds and black wheel arch flares made room for wider BBS alloys. Under the bonnet, the new all-aluminum V8 was de-stroked from the production 5,025 cc to 4,973 cc to comply with 5-litre FIA Group 4 rules. 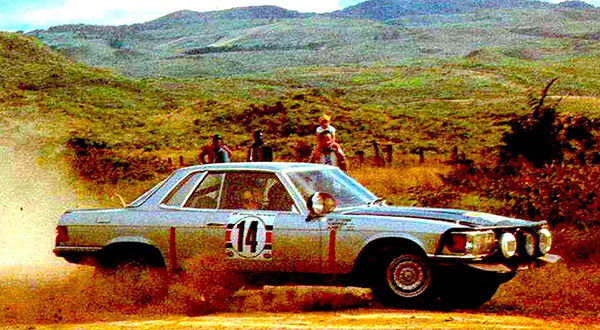 Merc Had to Build a Rally SLC for the Road Too
Mercedes-Benz also had to homologate the car in order to compete. That meant it had to build and sell at least 400 examples of the car it intended to rally. So it built the 450SLC C107.026. These 240 horsepower rally cars for the road had the same aluminum bodywork, along with wheel arches and spoilers, which owners could also delete option, and the like.

Knowing the 450SLC’s appetite for rougher, more arduous rallies, Mercedes focused on the African rounds in 1979. Rally legend Hannu Mikkola and navigator Arne Hertz wasted no time to shock the WRC establishment by coming home second at the Safari Rally. Mikkola and hertz went one better at the Ivory Coast 41 years ago this week as they stormed to Mercedes’ first ever World Rally Championship victory aboard the 450SLC on the Rallye Côte d’Ivoire.

Rally SLC Scores an utterly Dominant Ivory Coast WRC 1-2-3-4
But that’s not all. Bjorn Waldegaard and Hans Thorszelius ended second, Andrew Cowan and Klaus Kaiser third and Vic Preston Jr. and Mike Doughty fourth in an utterly dominant 450SLC showing. And while he also drove an Escort RS1800 to victory in Portugal, New Zealand and in Great Britain that year, that win and second place in the Mercedes-Benz 450 SLC contributed to Mikkola’s second overall in the ’79 World Rally Driver’s Championship. 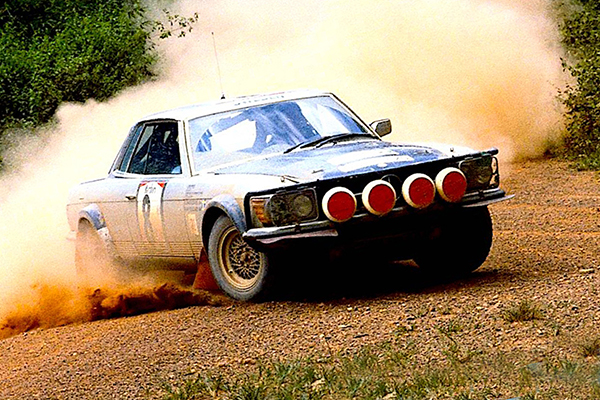 Enter the Rally 500SLC
Once again buoyed by its against the odds success, at World Championship level this time, Waxenberger and his Mercedes men developed the sizeable coupé for even bigger things. By then evolved to the 500SLC, the team prepared the C107 to less modified Group 2 Touring Car specification, rather than the previous Group 4 Special Touring Car rules.

That also meant that Mercedes had to build 1,000 units of the 300 hp M117, now fitted with a 4-speed automatic transmission. Power was upped to 329 hp by the end of the run. On the World Rally stages meanwhile, Mikkola and Hertz powered the new Mercedes 500SLC to second in Argentina and third in New Zealand, while Preston Jr. and Doughty took their 450SLC to third at the East African Safari Rally. 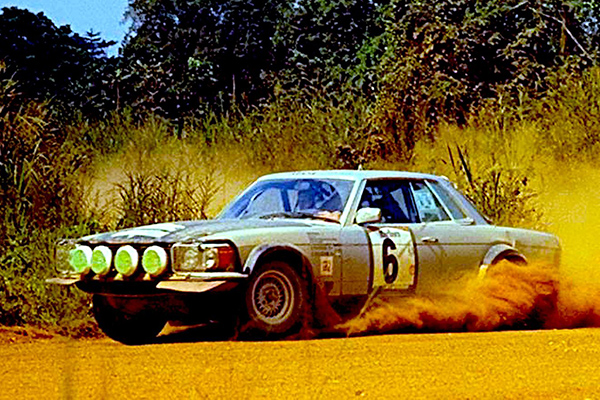 Rally SLC Leaves WRC Best-for-Last at the Ivory Coast Again
The team once again kept the best for last as Björn Waldeard and Hans Thorszelius won the Ivory Coast Rally as he led a Mercedes-Benz 500SLC 1-2 home ahead of Jorge Recalde and Nestor Straimel. That was enough to see the SLC to fourth overall in the World Rally Manufacturer’s Championship.

In the ultimate development of the 107 chassis, Waxenberger proposed a move to the shorter and lighter convertible SL platform in search of better cornering response. Packing the 722.2 four-speed automatic, window glass was replaced with Lexan and the roll cage hewn from aluminum. A large, high-rise handbrake was added to help rotate the big Benz, with world Rally Champion Walter Röhrl and Ari Vatanen signed to drive for the 1981 season.

Sadly, the Daimler board cut funding to the rally program, leaving the ultimate development of the 500SL stillborn. 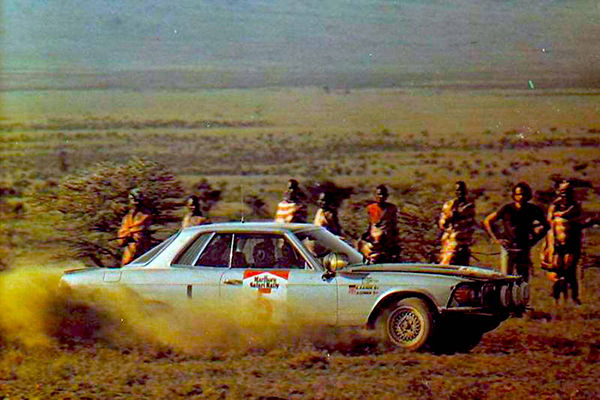 Perhaps the WRC’s Most Remarkable Success Story
Either way, in one of the least likely World Rally Championship success stories, Erich Waxenberger and his pioneering Mercedes-Benz motorsport men contributed among the sport’s most remarkable stories. Not only did they engineer near-standard SLCs packing supposedly inadequate automatic gearboxes to compete in the World Rally Championship, but also, they won while at it.

That’s a rather different way of going about it to specifically developing a car to win on the stages. And a sure sign of a proper SLC pedigree!