Manufacturers are continually striving to evolve the automobile. While the latest powertrain revolution is seeing combustion swapped out for electrification, inside the cabin, we’re seeing a technological revolution of a different sort. Out dependence on smartphones and technology is seeing automakers turning our in-car infotainment suites into extensions of our smartphones and smart homes through the integration of services like Amazon Alexa, Apple CarPlay, and Android Auto. Android is being used as the operating system of choice in some systems, and manufacturers are throwing in more screens by the day. 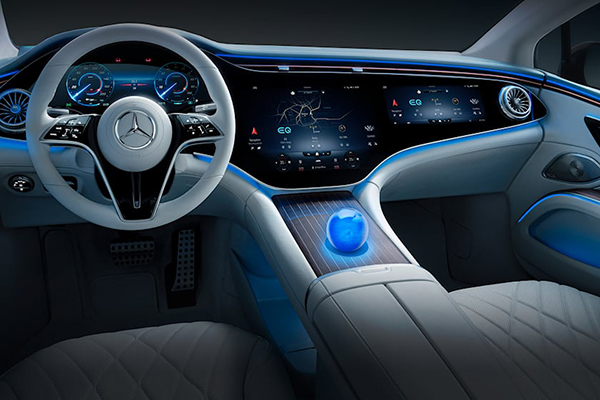 Mercedes-Benz is one such automaker, introducing tech like the 56-inch Hyperscreen to the all-electric EQS Sedan. But the German carmaker is taking infotainment a step further with a revolutionary way of controlling your infotainment. Forget touchscreens and voice control, you can now control your infotainment via a floating crystal ball.

CarBuzz has uncovered patent filings for the new technology with the World Intellectual Property Office. In the documents, Mercedes-Benz describes an invention relating “to a control device for controlling vehicles functions… which can be actively actuated by a person for control.” The patent further goes on to suggest that the control “is designed as an object which floats in a regulated magnetic field.”

Accompanied by several diagrams, we see a spherical control floating above the center console. Using magnetic field technology, the ball can hover and spin freely, and a sensor unit would be able to detect – we presume via light, movement, proximity, and gyro sensors – the actuation and input of the controller.

While we envision such a system utilizing a glass or crystal ball for design purposes, it would need to have some sort of metallic component in order for the magnetic field to be most effective. The patent suggests a permanent magnet housed within the controller. Still, this concept could easily one-up the rotating orb drive controller from the Kia EV6.

Patents do not always indicate a guaranteed usage of such a design, and there are several potential flaws. The magnetic field, for example, would need to cause the controller to hover, but also be strong enough to hold it in place. Imagine cornering vigorously when the crystal ball flies out of the magnetic field, only to hit your passenger in the face or smash a window a-la Elon Musk showcasing the Cybertruck.

BMW is already moving away from touchscreen technology, albeit due to the semiconductor chip shortage, but could Mercedes make the move permanent with this?