Daniel Lescow, Vice President of Global Sales, Marketing & After-Sales at Smart Automobile Co., Ltd announced on his Linkedin account that the smart brand will launch an SUV in 2022, being the first model of the new joint venture between Mercedes-Benz AG and Geely AG. 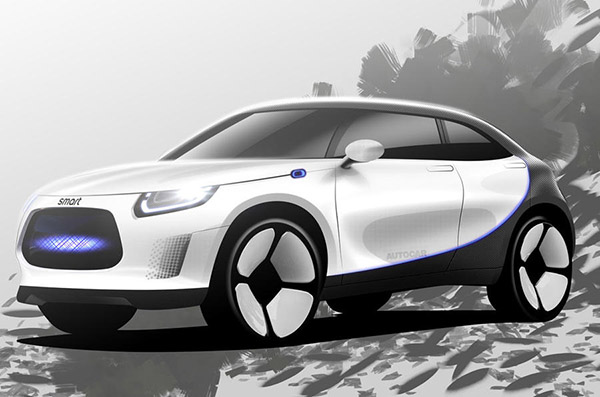 Daniel Lescow is excited about the smart plans and says:
“This won’t be just any SUV. This will be a true smart SUV that embodies all we believe in – progressive design, innovation, high-tech and, of course, battery-electric driving. I can’t tell you how excited I am about this vehicle. It will be exceptional – instantly recognizable as smart, ultra-modern, sophisticated and advanced in connectivity solutions. Most importantly, it will possess the “smartest” of all features – super-compact on the outside and big on the inside”.

smart also planned to build an SUV called Formore but the project was abandoned in April 2005 due to higher costs than expected.

The new smart SUV will be built on Geely’s SEA platform (scalable electric architecture) which is very flexible and can be used for a wide range of vehicles from small cars to minibuses. At the signing of the partnership between Mercedes-Benz AG and Geely it was foreseen that future smart models will be designed by Mercedes and developed in the Geely engineering center. But it seems that the strategy has changed, Geely providing its own platform for smart models.

smart will not give up traditional models and it seems that there will be a successor for both smart fortwo and smart forfour, both exclusively with electric propulsion as well as smart SUV.

The joint venture between Mercedes and Geely was created in January 2020 and each of the two concerns has invested 350 million euros in the future of smart brand.

On the other hand, Li ShuFu, Geely’s owner, is one of Daimler’s largest shareholders, holding 9.7% of the shares.

Geely is very active on the electric model market, launching in America the K22 mini model under the Kandi subbrand, which has nothing in common with smart. Geely also owns the Proton / Lotus, Volvo, Lynk & Co, Terrafugia, Panda and LEV brands.

The SEA platform could be made more profitable by using it for other mini class models under the Panda or LEV brands – the first car made on a 3D printer.