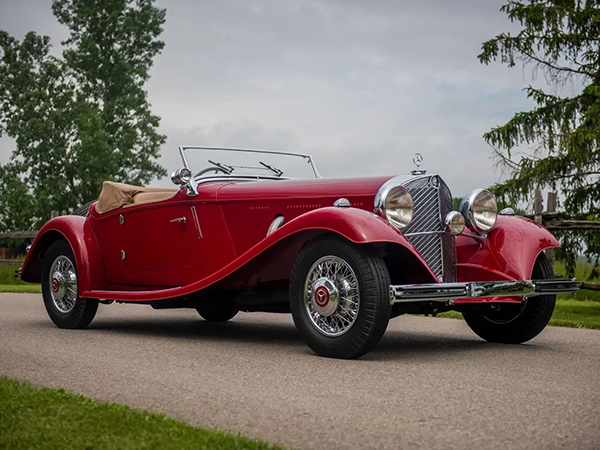 27 Mercedes models are on offer at Sotheby’s auction on August 18-10 in Monterey, California. Among the 27 models are 10 rare Mercedes 500 K and 540 K series convertibles produced before World War II.
Here is the list of models and the starting price:

1936 Mercedes 540 K Cabriolet A, starting price 2,000,000 USD
The Mercedes 540 K succeeded the Mercedes 500 K in 1936 and benefited from a larger 5.4 liter engine. The inline 8-cylinder engine developed 180 hp. The cabriolet version was produced in three separate series, A, B and C.
The model offered at auction is part of the first series and takes over the bodywork of the 500 K almost unchanged, with a set-back radiator shell-like as Special Roadster, low windshield, and long fenders. The model is right-hand drive and was delivered to Rose & Company in London in August 1936.

1935 Mercedes 500 K Cabriolet, starting price 1,750,000 USD
The Mercedes 500 K cabriolet by Saoutchik is the only surviving example tuned by the famous French coachbuilder J. Saoutchik. The car was bought by Dr. Charles Crocker following his visit to the Paris Motor Show on 3-13 October 1935. It became famous by winning the first Pebble Beach Concours d’Elegance held in 1950.

1936 Mercedes 500 K Normal Roadster, starting price 1,400,000 USD
Introduced in 1934, the 500 K was the second generation supercharged eight-cylinder inline made by Mercedes producing 160 HP. The Normal Roadster was even rare than the Special Roadster and only five units survived.

1939 Mercedes 540 K Special Cabriolet A, starting price 1,750,000 USD
With chassis number 408371 this 5-speed gearbox model produced in 1939 is the only model with a body to this design. Based on the standard Cabriolet A, it has a raked vee’d windshield from the famous Special Roadster and a low sloping tail. It was delivered to a customer in Paris on 29 April 1939 and subsequently won the Pebble Beach Concours d’Elegance in 1973.