The Mercedes 500K has been the sensation of the Berlin Motor Show since 1934. It had a revolutionary drive train construction with double wishbone front axle on the front and double-joined swing axle at the rear. The Mercedes 500K was the successor to the 1933 Mercedes 380 and differed from the 500 sedan by the K suffix from Kompressor. 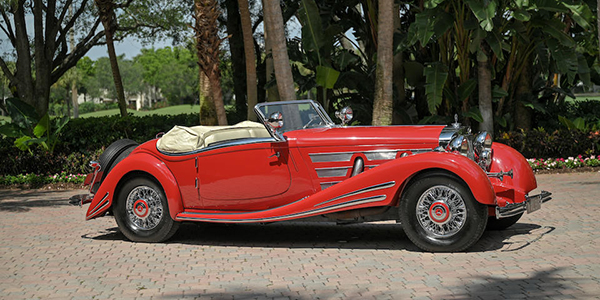 The powerful 5-liter 8 cylinder inline engine develops 160 HP and was supercharged with a Roots mechanical compressor that only started when the accelerator pedal was depressed to maximum. Then the engine provides 25% more power, used for overtaking or climbing a slope.

Those who drove the car at the time said that the road holding was neutral and that it was very fast when cornering. Until the compressor starts operating, the engine is docile and the acceleration is very mild. But when the acceleration is pressed to the maximum, the Mercedes 500K accelerates brutally.

H.S Linfield, road test editor at Autocar said that 500K “is a master car for the very few; the sheer insolence of its great power affords an experience on its own.”

A Mercedes 500K with a 540K engine upgraded from factory
The mercedes 500/540K offered at the Amelia Island auction belongs to the Howard Fafard collector who also owns other unique Mercedes models.

The Mercedes 500/540K Spezial Roadster offered at auction has a special history. It was the sixth model produced in the 500K series but in 1936 it returned to the factory where the car has received the 540K engine. But after this operation, the car retained the original 105136 engine series.

The specimen offered at the auction has an interesting history. In the early 1970s, collector Alf Johansson and Birger L. Nillsen went to Czechoslovakia in search of vintage cars. On the way to Czechoslovakia they passed through Poland and stopped in Poznan where they asked a local garage owner if he knows pepole who are selling vintage cars in the area. The garage owner told them he had a colleague who might know something but was not home at the time.

So the two left and decided to return when they will come back from Chechoslovakia. On their return from Czechoslovakia they passed through Poznan again and the garage owner colleague gave them the address of a family that owned this unique 500K Spezial Roadster which was almost complete but in need of restoration.

The two men bought it, brought it to Sweden and then sold it to Ingemar Bengttson, a passionate Swedish collector of Mercedes models. He was helped to restore by Jan Melin, an author of books about Mercedes 8-cylinder models, very much appreciated at Mercedes-Benz. The restoration of the car was completed in the early 1990s.

Bengtsson then donated the car to two charities in Sweden that do research into the treatment of cancer and Alzheimer’s disease, and they sold it at Bonhams’ auction at the Mercedes-Benz Classic Center in 2014. So it came into Howard Fafard possession who decide to sell it.