Alicia Keys, who is a brand ambassador for Mercedes-Benz, proves her loyalty to the brand once more in her latest music video, “City of Gods (Part II).” There, she is truly a vision as she appears with the 2018 Mercedes-Benz Vision EQ Silver Arrow.

Just a few weeks ago, Alicia Keys revealed she had purchased the Mercedes-AMG One hypercar. Of course, she didn’t take delivery of the much-anticipated hypercar because it hasn’t come out yet. But what she did receive is the GT Black Series P One Edition. She showed it off while she was out for a “couple’s drive” with her husband, DJ Swiss Beatz, who was driving his Ferrari SF90 Stradale.

Since Alicia Keys is a brand ambassador for the three-pointed star brand, she continues to show loyalty to them in her latest music video, “City of Gods (Part II).” The song, which is an ode to New York City, was a collaboration between her, Fivio Foreign, and Kanye West, and it interpolates the chorus from “New York City” by the Chainsmokers. But her new music video, which could be a futuristic ad for Mercedes-Benz, is a solo version of the song. 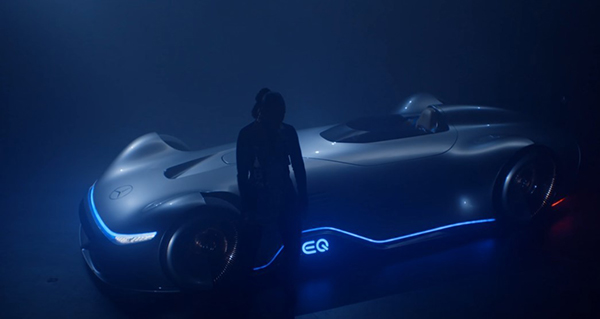 And one of the main things about it is Mercedes-Benz’s concept car, Vision EQ Silver Arrow. It was introduced in 2018 at the Monterey Car Week, and it draws inspiration from the W125.

But there are some major differences. The original one came with an eight-cylinder in-line supercharged engine with 646 ps (637 horsepower) and a top speed above 300 kph (190 mph). On the other hand, the 5.3-meter (17.4 ft) concept car, which has a sporty and futuristic silhouette, has an all-electric drivetrain, putting out 750 ps (739 horsepower). Its energy comes from an 80-kWh battery, which reportedly gives it a range of over 400 km (249 mph).

The interior of the single-seater is a mix of traditional and modern styles, with its design blending timeless aesthetics and futuristic technology. And it couldn’t look better next to Alicia Keys.