A facelift is already underway just two years after the official launch of the Mercedes-Benz EQV. Based on the spy shots we have seen earlier, it will get a revised face and back end. 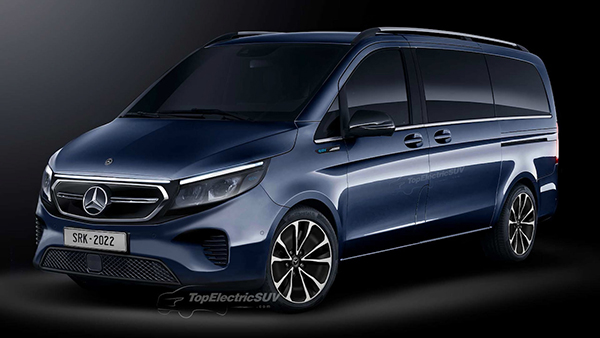 TopElectricSUV generated the new concept art for the facelifted EQV from the hints provided by spy shots. The rendered EQV for 2023 features an updated front grille with a new shape but retaining the thin LED strip on top, revised headlights, and a new front bumper design removing the protruding lip in favor of a mesh for air intake.

Although the 3D illustration only shows the front of the full-electric van, the rear is expected to get an updated bumper and taillights as well. In addition, it is worth noting that the rear camo in earlier spy shots suggests that the EQV’s liftgate is getting a LED strip bridging the taillights.

Meanwhile, the previous spy shots of the interior of the auto reveal new rectangular AC vents and redesigned dash. The existing circular, turbine-like AC vents are already looking good, but the new rectangular version would certainly look nicer and they provide a more practical way to cool the cabin quickly.

Among the other foreseen upgrades in the EQV will focus on its powertrain. Sources say that it might get the next-gen EV battery of Mercedes, which will raise its electric range from the current WLTP estimate of 357 km (222 miles) to 500 km (311 miles) at full charge.

Sales of the updated Mercedes-Benz EQV might start as early as 2023.