Avatar: The Way Of Water is the long-awaited sequel to James Cameron’s visually stunning 2009 blockbuster, but the fantasy planet of Pandora will become earthbound via a concept car from one of our favorite European automakers.

The Mercedes-Benz Vision AVTR first debuted in 2020, but the three-pointed star is trotting it out yet again to commemorate the release of the second Avatar film. We recently had the opportunity to get up close and personal with the Vision AVTR, where we saw both its unusual bodywork and futuristic propulsion system up close.

If you squint, the Vision AVTR bears a resemblance to Mercedes’ existing EQ lineup of electric vehicles. The bold grille panel, for example, sports a centrally located Mercedes-Benz star, but includes some unique design touches to help it feel more three-dimensional and sophisticated. The smooth bodysides, likewise, recall such vehicles as the Mercedes EQS sedan, though the full glass doors promise a unique view out of the car.

Beyond that, however, the AVTR is the stuff of concept car dreams. The rear deck features dozens of little scales that retract into the bodywork for maximum aerodynamics when appropriate, but they can also tilt forward to provide downforce, backward for an air-brake effect, or side to side to act as a rudder when cornering. Lights illuminating the scales work hand-in-hand with the taillights and indicators, leaving no question as to your intentions.

The bubble-shaped rolling stock is comprised of a solid sheath of rubber that wraps onto the wheel faces. The wheels themselves have a sleek flower design that ties into the Avatar series’ themes of conservation and preserving the beauty of nature. What’s more, there’s four-wheel steering that can even move the AVTR sideways. 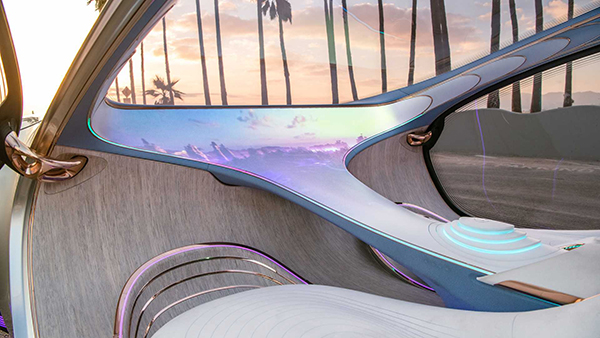 As you approach the Vision AVTR, it “comes to life” with a glowing ballet of LED animations and a check control of those rear deck scales, and the entire center console moves up and down gently, as though the car is breathing. Mercedes says this is to underscore the connection between the operator and the machine, similar to the connection between the Na’vi and their flying banshees. Enter the Vision AVTR and the leaned-back seats envelop you slightly, and as you move your hand toward the center console, a single trackpad rises to meet your palm. Moving it forward and backward has the same effect on the car, predictably.

But if you twist the top of the trackpad and push it forward, the car moves laterally, giving you more flexibility over how you want to drive. What’s more, you can combine motions – a twist with forward, backward, or left and right – to provide immense control in tight confines. It feels as though the AVTR could make a U-turn as narrow as its wheelbase or parallel-park in a space with just a few inches of room. It’s a bizarre experience, but one that’s a whole lot of fun.

Now, being a concept car, the Mercedes-Benz Vision AVTR had a limited top speed, and we weren’t allowed to drive it outside the parking lot. But I can safely say that the gorgeous show car provided more thrills than we’ve ever had at 20 miles per hour, and the looks it got from passersby were hilarious.

It’s unclear if the Mercedes-Benz Vision AVTR will actually make an appearance in the film Avatar: The Way Of Water. Whether or not the humans in the film cruise around in Benzes, it’s still very cool that Mercedes built a vehicle that backed up its futuristic styling with an equally forward-thinking driving experience.