Mercedes-Benz is credited for creating the first automobile in 1885, but it also claims the birth of a different type of vehicle: the truck. In 1896, Daimler-Motoren-Gesellschaft, the company that merged with Benz & Cie Rheinische Automobil und Motorenfabrik to create Daimler-Benz AG in 1926, built what is claimed to be the world’s first motorized transport vehicle with a two-cylinder engine and a 3,300-pound payload capacity. In the same year, Karl Benz built a “van-type delivery vehicle” for a Paris department store. That early heritage paved a pioneering path in the van, truck, and transport sector that continues today with the beloved Mercedes-Benz Sprinter. Part of that path includes the L 319 series of vans and trucks that set the tone for the two vehicles seen here, a 1961 Mercedes-Benz O 319 passenger bus and a 1965 Mercedes-Benz L 407 fire truck. 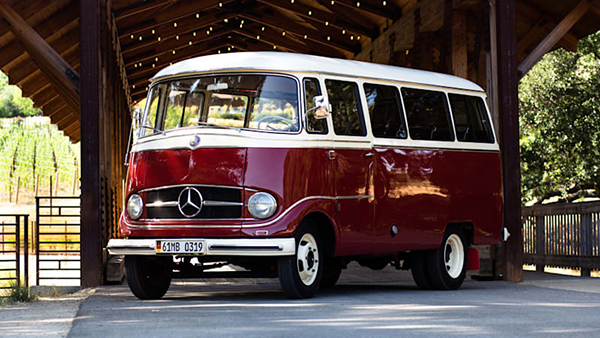 From seperate sellers, the O 319 and L 407 are both currently listed for sale on popular car auction site Bring a Trailer. The O 319 is a passenger bus that debuted around the same time as the L 319, hence the similar rounded cab-over-engine design. It features a two-tone paint job and can fit up to 17 passengers, though some of the seats are apparently missing. According to its listing, this bus was originally used as an Idaho ski resort employee shuttle, but it has since been refurbished to get it to its current beautiful shape. The original 1.8-liter diesel inline-four is separately included but has been replaced by a 2.2-liter Toyota 20R inline-four that links to a five-speed manual transmission on the floor. The bus also comes with a Mercedes-Benz branded wicker basket perfect for picnics.

If the red on the omnibus is too dull, consider the bright red L 407 fire truck. In the ’50s, when the L 319 launched, the name reflected the “internal design name” customary at the time. But things shifted in 1963 when Mercedes-Benz introduced a new naming architecture that included weight and output data, a system that is still in place today. So, the L 407 looks similar to the L 319s but has a different name. 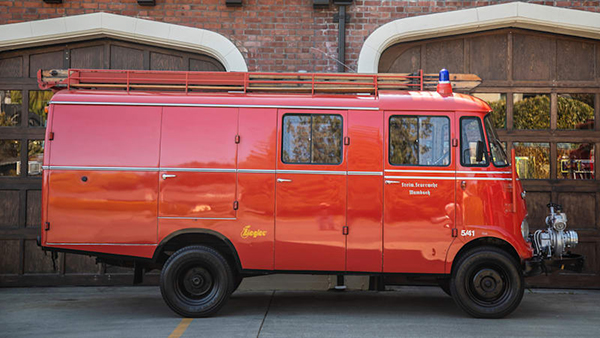 This particular fire truck is listed with no reserve, a fireman’s logbook, and a clean Washington state title. According to the listing, it was originally used by the municipality of Mambach in Baden-Wurttemberg, Germany, and was later imported to North America. It features a 1.9-liter M121 gasoline inline-four that connects to a three-speed manual transmission and powers dual rear wheels. A Ziegler water pump is mounted to the nose, and other fire equipment includes a ladder mounted to a roof rack, roof-mounted emergency lights, and sirens on the front bumper. In the rear of the truck, there is a hose reel, as well as more space for equipment. With less than 11,000 miles on the dial, it maintains its shiny red looks thanks to a respray by the previous owner.