We all have hobbies, some more expensive than others. For businessman Manny Khoshbin, collecting high-end cars is his favorite activity, and he is known to have a soft spot for the Mercedes-Benz SLR McLaren. He owns not one, but five of these long-hooded beauties, so you can imagine keeping them in tip-top shape doesn’t come cheap.

HOW MUCH IS IT TO SERVICE 5 SLR?! || Manny Khoshbin

The wealthy realtor explains SLR owners have to do “Service A” on an annual basis and a more thorough “Service B” once every two years. The former costs $5,000 while the latter sets you back approximately $8,000. All his SLRs are in need of Service B, so he’s looking at $40,000 right off the bat. There’s more to the story than that as every five years, the spark plugs need to be changed, but with the SLR being a low-volume special car, it’s a cumbersome process.

Manny Khoshbin says Mercedes technicians need to take out the supercharged 5.4-liter V8 engine as well as the tires and many of the oily bits. It takes about 30 hours to get the job done, and it goes without saying the service fees for this lengthy process of replacing the spark plugs cost a pretty penny. Then there are the hydraulic shocks for the butterfly doors, which are $1,000 apiece, and apparently don’t last long. 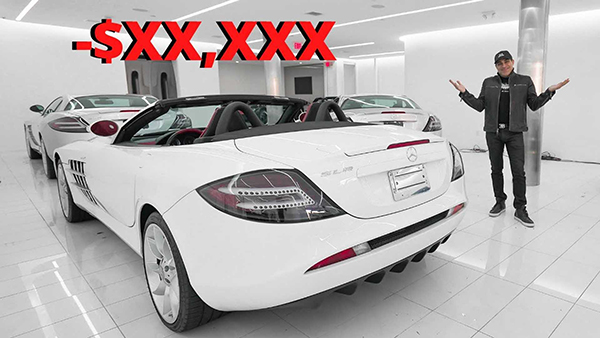 Beyond the routine maintenance, damaging the dual-vented hood could put a serious dent in your bank account. Because it’s made of carbon fiber to keep the weight down, replacing the SLR’s hood costs a whopping $75,000. Factor in the costs to change the tires on all five cars, Manny Khoshbin has what we’d call a first-world problem.

Aside from his affinity for all things SLR, Manny Khoshbin also has several Bugattis, the modern-day Porsche 935, McLaren P1, and many more. He’s also waiting for a Mercedes-AMG One, not to mention a Koenigsegg Jesko and a McLaren Speedtail.

And no, famous chef Gordon Ramsay did not design the Mercedes SLR. It was Gorden Wagener. We’ll excuse the businessman for his comical faux pas.