Located in São Paolo, the Interlagos circuit has been home to many unforgettable moments in motorsport. The Autódromo José Carlos Pace has crowned many Formula 1 champions and produced some spectacular racing, but more recently a Mini Cooper somehow found its way onto the track during a touring car race.

We’d be remiss not to mention that there are a countless number of petrolheads who would love to have their shot in motorsport, but this is truly taking it to the next level. While that would be a story for the history books, this was simply a misunderstanding.

It turns out the driver was a publicist covering a nearby drag-race, who took a wrong turn and ended up on the circuit. Immediately after realizing the mistake, they parked off the racing-line, turned the hazard lights on, and waited for help. While it would be easy to assume that there was malicious intent, the disoriented motorist was quick to mention that there weren’t any cones, signs, or staff to delineate the live race track from the exit road. 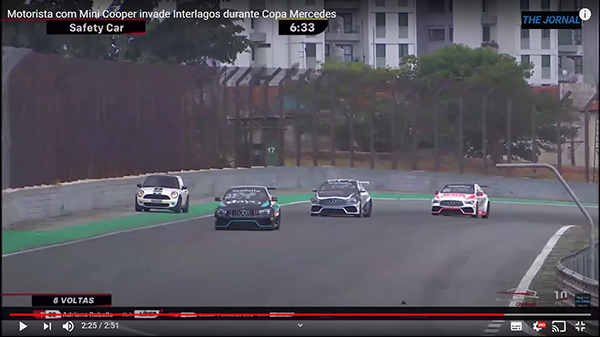 As such, the event taking place was the fourth round of the São Paulo Motor Racing Championship – a regional Brazilian touring car series. Thankfully nobody was hurt, but the release of the safety car would likely have played a role in the results of the race. It’s very difficult to gauge gaps from the footage, but any safety car period puts the lead car at a massive disadvantage.

The incident will likely be a learning experience for both parties and result in safer protocols for future events. Thankfully the damage was limited to some embarrassment for the Mini driver and frustration for the race leader.