Crawling along on the congested freeway at about 35 mph in a Mercedes-Benz EQS 580, I was cut off by a semi, and later stopped just in the nick of time to avoid contact when the car in front of me suddenly panic-braked. Later, a quick evasive maneuver allowed me to narrowly miss two cars’ sudden lane changes just ahead. 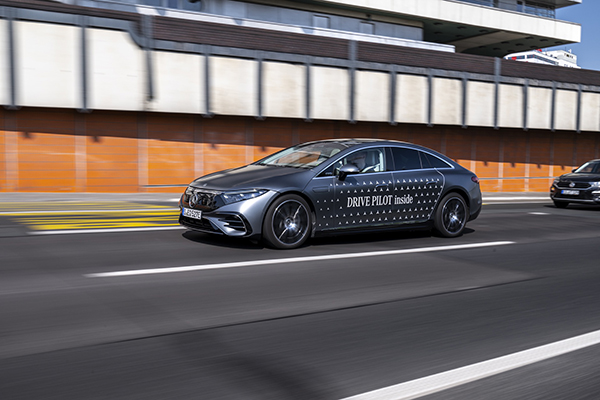 Although this might sound like a typical, pulse-quickening day—or a good day, on the 405 in LA—and I was in the driver’s seat, from some legal standpoints I wasn’t actually driving.

Had an accident occurred in these situations, it would not have been my fault. So said Mercedes-Benz, as it prepares for the U.S. launch, perhaps as soon as next year, of a different kind of automated driving system.

“Conditionally automated driving” is the key phrase real here, and it’s the reason why Mercedes calls Drive Pilot an SAE Level 3 system and not a Level 2 system (or the confounding Level 2 Plus).

(Automakers a level of driver assistance to each car’s capability, with Level 1 being simple cruise control, Level 2 offering some brief moments of driver-attended hands-free motion—and at the top, Level 5 being a completely autonomous self-driving car, able to start, drive, and stop with no driver present.)

It’s a big step forward. Even though Level 3 Drive Pilot doesn’t offer the high-speed operation and hands-free lane-change features of GM Super Cruise, Ford BlueCruise or Tesla Enhanced Autopilot, it does completely hand off the task of driving (and the responsibility) to the car in some very specific conditions, to give drivers some moments to themselves in the car—moments that might not be so nerve-wracking.

The system could be on LA freeways next year, though. Mercedes is aiming to get regulatory approval for its use under similar conditions in California and Nevada by the end of the year, and it’s prepared to extend the same legal backing for liability should something go wrong.

Building on adaptive cruise control with a lot of brains and sensing
It was easy to acclimate to how Drive Pilot operates, but nerve-wracking given the video-game-like rate of potential mishaps a team of experts threw at us on the test course. White lights at the 10 and 2 positions of the steering wheel indicate it’s ready to be engaged, and green lights indicate it’s at Level 3.

So, if you have an accident with a green light on, it’s not your fault; it’s the manufacturer’s fault.

Drive Pilot steers to keep the vehicle in its lane and otherwise functions as an adaptive cruise control system, following vehicles ahead. It’s hyper-aware, though, and ready to perform evasive maneuvers and/or abrupt braking.

The system builds on what’s included in these models’ Driving Assistance Package—a Level 2 system—but it adds a lidar unit in front, additional cameras, and ultrasound and moisture sensors. One of the main purposes of the extra rear camera is to detect emergency lights, and the system taps into the interior microphone to detect sirens.

Another camera keeps an eye on the driver. That’s not foolproof, though. At 6-foot-6, I recently drove an EQS with the Driver Assistance Package on U.S. highways and had trouble getting my seat and steering wheel in the proper position, as the system repeatedly asked me to readjust.

But Drive Pilot’s software is far more advanced. Redundancy in the steering, braking, wheel speed sensors, and more—like an entire second set of wiring for the steering—helps make sure that even if vehicle systems fail, Drive Pilot can provide a 10-second handoff for the driver to take control. The system carries two separate computational layers and has more computational and sensing smarts than an A380 Airbus, according to Matthias Struck, a senior safety engineer at Mercedes-Benz, while drawing less than 50 watts of power. That’s less energy than Audi’s earlier Traffic Jam Assist, which had been U.S.-bound for the A8 but never arrived.

10 long seconds of handoff
If the system encounters a situation in which it wants to hand off control to the driver for any reason. It first issues a prompt requiring an “OK” click of the left steering-wheel toggle. Then three seconds later there’s a haptic buzz of the seat belt, followed by a second buzz a few seconds later. Beyond 10 seconds, it will slowly bring the car to a stop if there’s still no response.

The 10-second handoff is a big deal, requiring additional hardware not just for redundancy but precision and accuracy. A high-precision GPS system is the foundation, digitally fused with anonymized data for lidar, camera, radar, and ultrasound, plus a digital HD map with information on road geometry and more. With it, Mercedes claims accuracy to the centimeter instead of the meter.

Mercedes emphasizes that Drive Pilot hasn’t been developed quickly. In addition to years of engineering, it’s involved data protection officers, ethics experts, lawyers, and various compliance levels. Roughly eight years of data went into the mapping of scenarios, including various studies on what works and what doesn’t for the handoff of control back to the driver.

The system always uses multiple methods to make sure it’s on the proper roadway, adding in camera and lidar data, as well as road marker information, and it doesn’t ever go only by GPS, as it’s feasible that could be manipulated. 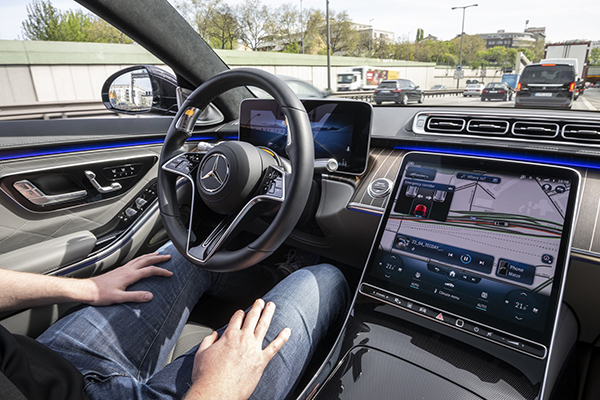 Why Mercedes sees Level 3 as a big step forward
In the five SAE levels of driving automation, Level 3 is conditional automation. Many automakers have said that they’ll skip Level 3 automation because they believe the conditions are vague in interpretation, and it may be dangerous to immediately hand all driving functions back to a human that isn’t required to pay attention to the road.

But for Mercedes, those conditions are quite straightforward: The driver has to stay in position and monitor the system. In position means you can’t recline more than about four inches from your normal driving position. You’re allowed to take your hands off the steering wheel, to take your eyes off the road, and even to turn your head to the side. But you can’t take a nap.

As I discovered in my short closed-course test-drive, some flexibility is built into the system. For instance, as long as you’re belted, it’s OK to look back to a child in the back seat for three to five seconds.

You can push it too far, though. After consulting with the engineer in the passenger seat, I closed my eyes completely, and just eight or nine seconds later a prompt popped up asking me to confirm I was still alert. I ignored it, which soon started the 10-second countdown toward disengagement.

But the liability shifts the moment you leave your seat or shift out of position. “If you have Drive Pilot engaged but leave your seat, it’s your fault because you are responsible to sit in your seat and take over control if the car prompts you to do so,” said Struck.

Accountability, taken seriously
Mercedes keeps track of all of this in a few different ways. Firstly, there’s a device that records when Drive Pilot is activated and when it’s deactivated. This is anonymized and stored in the car but not uploaded anywhere. The system also keeps track of incident data, which is car-specific should and incident occur, and the company has a special team watching the market and following data that’s created with every incident or whenever there is a full braking event.

Customers must agree to share this data. As part of the certification process in the U.S., owners will be required to fully watch a video on the infotainment screen, and confirm. The video will also be available on Mercedes me, the brand’s digital platform that includes a smartphone app.

“From a technical standpoint we would be able to go maybe faster, maybe also perform a lane change, but that’s a topic for the future,” said Struck, who called the system “perfectly suited” to the 60-kmh speed, as the company aims to establish customer trust.

The system is now tuned for German regulations, which require that the vehicle stay in a single travel lane. The vehicle isn’t allowed to stay in this mode if it needs to leave the lane for evasive reasons, and it’s not allowed to do lane-changes.

That explains why, when I was cut off by a series of vehicles rather than one and Drive Pilot had steered slightly to the side a bit out of the travel lane to avoid contact, it decided to pass off control to me. With just one car darting at a tangent in front of me, it had instead been able to blip the brakes and remained engaged.

For especially strong braking or a strong lateral maneuver, there’s also a takeover request, though.

Carrying Drive Pilot over to undisciplined American lanes
Things are quite different between the Autobahn and LA freeways. The lane limitations might not apply so strictly in the U.S., where lane markings are a major hurdle because they’re inconsistent and sometimes nonexistent. One engineer also called the intermittent reflectors used in some American highways “very challenging” as they create a need to teach the system a new set of conditions.

Mercedes says it currently has test drivers and test routes around Los Angeles for Drive Pilot. So far it’s only trained engineers and test-drivers, not customers.

Drive Pilot may not be as glamorous as a system that performs lane changes and can make urban journeys with the driver’s hands mostly off the steering wheel, but it’s a fully developed system you can truly trust on a congested freeway. You’re not a beta-tester.

In a slog of slogs, like the 405, you might be able to let your mind wander for a little bit, at least. Just don’t close your eyes.