Mercedes-Benz 500 K Special Roadster might be a pre-war vehicle, but back in the 1930s, it was a sign of extravagant opulence. Only industrial magnates and celebrities dared to dream of being seen in such a wheeled masterpiece, not only because of its absurd price but because only a handful of these beauties were produced. This beautiful wooden version of it manages to perfectly capture its essence.

Making its debut in 1934 at the Paris Motor Show, the 500 K Special Roadster attracted attention instantly, with its elegant lines, rear-mounted driver’s cab, and long hood. It is based on the W 29 model series and only 26 units were produced for the most privileged of those times. Each car was hand-built to meet the exact wishes of the customer, with the production time being at least five months. Nowadays, the Special Roadster is worth millions of dollars at auctions, as it is a very rare treat.

The 500 K is almost 197” (5 meters) long and weighs 5,180 lb (2,350 kg). It features a thick, rigid front bumper, prominent fenders, flashy, round headlights, two seats in the cabin and two rumble seats in the back (also referred to as “mother-in-law” seats by the Germans), and leather upholstery. A low, two-part windshield (barely) protected the occupants from the wind. 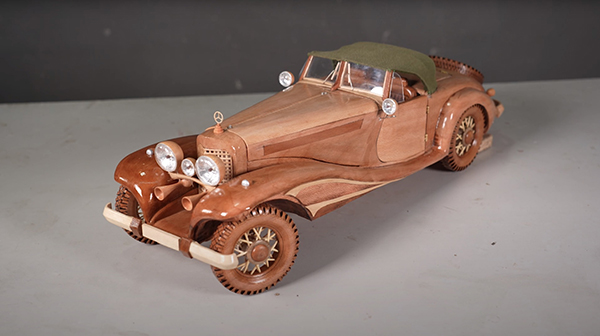 In addition to being a treat for the eyes, the Special Roadster was also one of the fastest Mercedes-Benz cars of its time, able to reach a top speed of 100 mph (161 kph). Under the hood, it features a 5-liter, in-line, eight-cylinder engine. A supercharger with a switch on the dashboard increases the power even further.

It is fair to assume that most of us will never have such an exquisite roadster embellishing our garage, so here’s the best next thing: a beautiful wooden model of the Special Roadster, such as the one you see in the video below. While it may be just a miniature version of the 500 K, it’s a very accurate one that required a lot of craftsmanship and patience to come to life, given that the starting point was a lifeless block of wood.

The guy who carved it can be found on social media as Awesome Woodcraft and many of his creations are for sale.