Brake checking another vehicle is one of the dumbest things you can do while behind the wheel and can have pretty severe consequences, as the owner of this Mercedes-Benz recently discovered.

It is believed that this video was filmed somewhere in Poland back in November. The video starts by showing the driver of a Mercedes-Benz estate overtaking a slow-moving tractor.

Rather than simply overtaking the tractor and going about his day, the Mercedes driver suddenly slams on the brakes, forcing the driver of the tractor to swerve to the left in order to avoid hitting the car. The Mercedes then accelerates again and this time swerves into the opposite lane and hits the brakes once again. This time, the tractor driver wasn’t able to stop in time and ends up rear-ending the Mercedes, crushing the rear end and breaking the window. 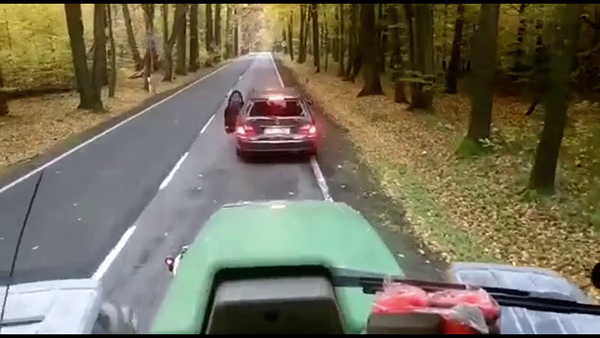 Immediately after the impact, both drivers pull over to the side of the road and the Mercedes driver approaches the other driver. According to a Redditor, the tractor driver immediately said to the Merc owner “Bravo, I have got everything recorded,” to which the brake checker responded “So do I.”

It’s hard to say with certainty just what caused the Mercedes owner to drive so recklessly, but it’s possible they got infuriated while stuck behind the tractor and decided to express their anger. As it turns out, it wasn’t the wisest of decisions.