If you insist that your station wagons be of the luxurious, three-pointed-star variety, we have some bad news for you: The Mercedes-Benz E450 4Matic wagon is dead. It’s been killed off here in the U.S. by its previously foreign-market sibling, the near-identical All-Terrain. That takes some of the sting out of the news, we suppose, since the majority of the objective differences between the new All-Terrain variant and the outgoing E450 wagon are minimal. Even so, Benz’s move clearly hinges on the idea (often cited for wagon killings in the U.S.) that Americans will only purchase station wagons if they’re labeled as SUVs or made to resemble them. 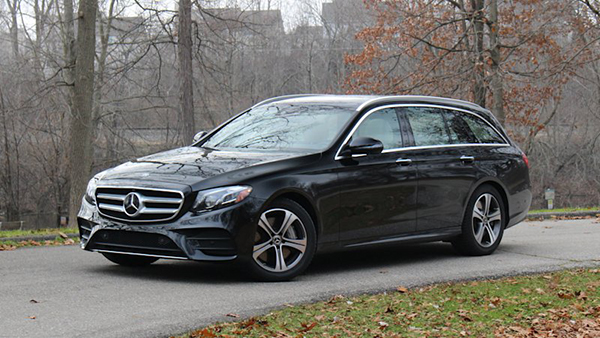 Yes and no. Look, rumors have been floating around that the traditional E wagon was not long for the New World, and a Mercedes-Benz representative confirmed as much when informing us of the 2021 E-class lineup changes. The All-Terrain that replaces it here in the U.S. is, still, a wagon—simply one cut from the same template as the Subaru Outback. In fact, our own Angus MacKenzie described the All-Terrain, which has been on sale in Europe for a bit now, as “the world’s best, most lavishly equipped Subaru Outback.” Our drive of the European-market E320d All-Terrain variant revealed a soulful, hearty wagon that broadens the appeal of its purely on-road sibling. 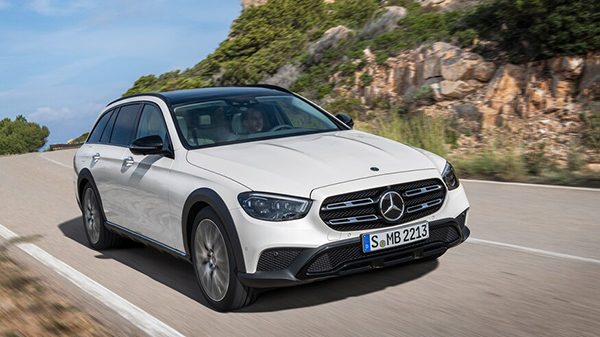 The Outback comparison is no slap in the fancy Benz’s face. According to a CNBC review of sales data late last year, the Subie represents 85.7 percent of all wagon sales in the U.S. Basically, the wagon market in America is the Outback. Subaru once offered a lower, uncladded version of the Outback—the Legacy station wagon, which in this allegory is similar to the non-All-Terrain E450 wagon—but put it out to pasture in 2014 in response to changing customer tastes. Sure, the Outback and the E-class occupy vastly different market segments, but today, overarching market forces see customers favoring crossovers and crossover-like vehicles. Lifting the E-class wagon and adding matte-black plastic body cladding, faux skid plates, and a more rough-and-ready grille are moves expected to broaden the vehicle’s appeal. Let’s put it another way: Imitate the GOAT in the segment, and there’s a chance some of its success will rub off.

While that’s good news for our average car buyer, to whom a blend of rugged and outdoorsy looks and semi-crossover stance will almost certainly add appeal, it is not clear how the brand’s existing E-class wagon owners will react. They’re traditionally among the wealthiest customers the brand has, and they are deeply loyal. Even though the wagons these buyers snap up amount to a rounding error in the company’s sales figures, the same customers often have other Benzes in their stables. Remember, wealthy car owners tend to have a large number of vehicles. 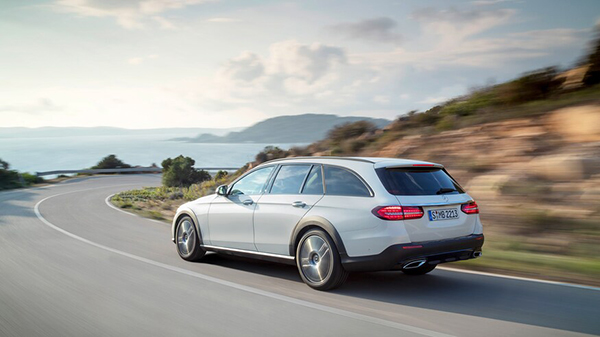 If those upper-crust clients can get past the All-Terrain’s less elegantly understated appearance, they’ll find it really is the same ol’ E-class wagon, albeit updated along with the rest of the E-class lineup for 2021 with some serious hardware. Gone is last year’s 362-hp twin-turbo V-6; in its place is a new turbocharged inline-six backed up by a 48-volt electrical system and mild hybridization. The new electrified powertrain makes the same 362 horsepower as before, along with 369 lb-ft aided by up to 184 lb-ft from an electric motor. Mercedes also finally made the E’s available dual 12.3-inch screens (one for the gauge cluster, another for the central display) standard, and gifted the lineup a new steering wheel.

All of these changes nudge the All-Terrain into the direct path of the Audi A6 Allroad, which is returning to the U.S. for 2020, and the Volvo V90 Cross Country. Will a more clearly defined set of competitors increase the Mercedes station wagon’s profile, perhaps moving the needle for wagons in general here? Wagons that aren’t named Outback account for just 0.002% of the entire U.S. car market. Perhaps the cladded-up, pseudo-crossover E450 All-Terrain can increase that share by a few fractions of a percent, or maybe Mercedes is playing a dangerous game with the emotions of a small but ardent customer base. The stakes are low either way.