Mercedes really delivered a winner with its W124 series, and the numerous derivatives (from sedan to a long wheelbase rolling chassis) are a big statement of its success. It’s no wonder some people wanted their tamer four-door to look as if ready for all sorts of DTM shenanigans.

Let’s take this no reserve 1987 Mercedes-Benz 300E 5-speed as an example. It looks great from afar thanks to its Midnight Blue exterior finish and the tasty upgrades, including an AMG body kit, 17-inch AMG Aero I wheels, a color-matching grille up front, and a cool set of hidden features.

Coming in closer, one notices the paint blemishes and all the cracks associated with a more than three-decade-old stint on planet Earth. As such, this 34-year-old German sedan might not look like much when considering that it’s been moving from Hawaii to California, then Massachusetts, and, lastly, Michigan. 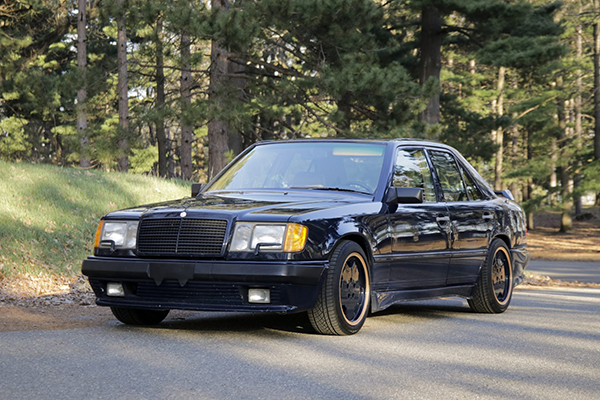 It has also been on the road for some miles, adding to the odometer count a total of 112k miles (180,000 km) before being put up for sale by Bring a Trailer user jsaks. But there are also a few interesting details to be taken into account. First up, this is a no-reserve sale, meaning that somebody could end up paying less than expected if the current low bid of just $3,200 becomes official at the end of the auction process (which is coming to a conclusion fast, in less than nine hours at the time of writing).

Before going inside, we should also mention the understated but sporty looks coming from the cool AMG body kit and the color-matching 17-inch with contrasting gold surrounds. And from then on, we’re free to share some secrets that aren’t apparent from outside—starting with the nice Palomino MB-Tex (174) upholstery with matching trim on the door panels, lower dashboard, Coco floor mats, or the Zebrano wood trim accents.

But the real highlight for the cockpit experience is actually the replacement five-speed dogleg manual transmission that’s paired with a 3.0-liter M103 inline-six that has also been through quite some TLC over the years, as noted by the description. And that’s not all, because there are more secrets to be shared, such as the enhanced suspension features (H&R lowering springs, Bilstein B8 shocks, 500E-specification rear sway bar) or the sporty leather-wrapped Nardi Gara steering wheel.