Bringin’ down the Hammer on friday. Im really digging the stance of this badboy, just the way it is… Simply aggressive.

Widely regarded as that crazy special AMG that helped pave the way for hot luxury vehicles, the Hammer remains a benchmark in recent Mercedes-Benz history. And it could become even more interesting as AMG becomes electrified.

It’s only progress, so Mercedes-AMG will see its future a bit greener. Then a lot more EV. That could make the Hammer 124-series E-Class even more interesting for collectors. It was the European sedan/coupe to rule them all back in the day, sporting a feisty V8 engine up front, a luxurious interior in the middle, and a limited-slip differential at the rear. All copiously wrapped in a widebody kit to make sure everyone catches the AMG drift.

Sometimes, quite literally. There are always those who might seek to hold the Hammer as a garage queen because of course its intrinsic value won’t go down too soon. Hopefully, there are also those crazy enough to make it a weekend getaway car, if not a daily driver. That would be a little too wishful thinking. 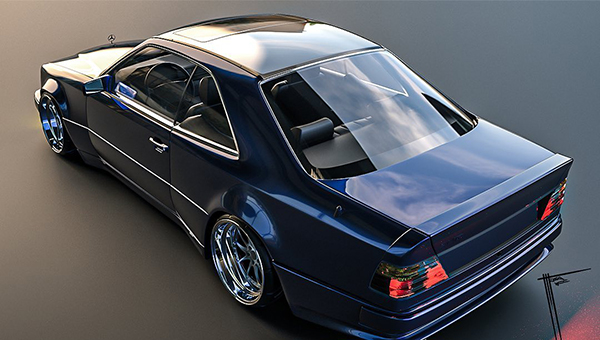 Speaking of, probably so is the recent project from pixel master Musa Rio Tjahjono, the virtual artist behind the musartwork account on social media. Although we know very well that Musa is the Head Designer of West Coast Customs during work hours, we have a feeling this creation stems from the off-duty periods. Nonetheless, it’s one to virtually attract our attention.

And it does so without too much effort. The massive V8 is already there from real life, and so it’s the widebody kit. All that remained was to properly take care of the minute details. After all, you don’t get exaggerated with legends. Instead, the CGI expert delivered a cool stance and some new elements for the two-door body to stand out even more in any crowd.

They aren’t hard to spot, though. Those yellow-tinted fog lights put everything into the proper vintage atmosphere, so we can ogle at will at the polished deep-dish wheels or the rest of the sporty elements. All in all, one can still see the WCC influence, restrained as it may be.