This 1992 Mercedes-Benz T1 camper has been on three continents. It came from a factory in Europe. Someone in Japan was the first owner. Now, Ottoex imported the vehicle to the United States and already found a buyer for the rig. This video offers a complete tour before delivery to the customer.

The T1 was the predecessor to the Sprinter in Mercedes’ commercial van range. This one gets power from a Mercedes OM602 2.9-liter five-cylinder diesel engine. It runs through a five-speed manual.

From the outside, this camper is big and boxy. The Reimo roof extension adds quite a bit of height to the vehicle. From the exterior, there’s access to several storage areas, and there’s even an outdoor shower. An extendable awning offers shade while resting during the day.

As a Japanese product, the steering wheel is on the right side. The instrument panel is very simple. There’s no tachometer, but the driver looks at a speedometer, temperature gauge, fuel level, and a clock. There’s an aftermarket radio. 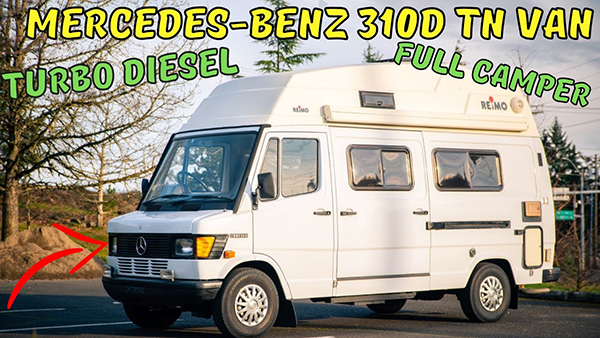 A large, sliding door on the outside provides access to the living area. The first thing you see is a dinette with five seatbelts. This can convert into two forward-facing rows. Or, the table folds away, and this space becomes the bed.

A neat feature is above occupants. There’s a storage space that holds the extra cushions to create the bed. This section slides fore and aft. With it out of the way, there’s a significant increase in headroom.

At the back, there’s a kitchenette with a sink, two-burner stove, and refrigerator. Drawers and cabinets provide storage for food prep tools.

The wet bathroom includes a fold-away sink to provide more room when taking a shower. There’s also a cassette toilet.

Ottoex notes that in its experience these Mercedes T1 campers are not common in Japan. RVs from the country’s domestic automakers like Toyota and Isuzu are what we usually see.