It’s no surprise, crash test dummies live a pretty rough life. Constant impacts every day, and their vehicle gets blown to bits. However, that all changes in Mercedes’ latest Crash Tales series which follows Tommy and Fred; two personified crash dummies. The first episode lays the foundation of the two characters and where the series is heading.

Before the duo set off towards an inevitable crash, a loudspeaker announcement declares it’s their lucky day. Unlike normal tests, they are allowed to use the brakes in the latest demonstration to evaluate a new set. “I’m a crash test dummy for heaven’s sake, I love crashes,” says Fred, clearly unamused. 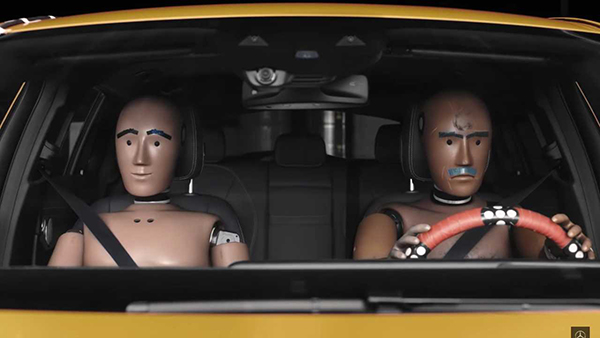 The Mercedes in the video appears to be the Mercedes-Benz EQC, the German automaker’s latest Electric SUV. With the figures that the EQC boasts, it’s no surprise that Fred and Tommy are testing out the brakes. The vehicle features a potent electric motor at each axle, producing a total of 402 horsepower (300 kilowatts) and 561 pound-feet (760 Newton-meters) of torque. Even with all of that pep in its step, the Mercedes-Benz can still go the distance with a quoted range of over 200 miles.

While Fred is clearly unamused, Tommy is quite the opposite. He can’t wait for further demonstrations in the testing program. It’s clear to see that while Fred is the pragmatist of the group, Tommy is the optimist. While we’d also love to test out the brakes, we’ll leave the crashing to the professionals.