When it comes to so-called self-driving systems, Tesla has been in the news often. In June, the automaker seemed to be returning to radar-based semi-autonomous driving technology, but a couple of months later, Tesla decided that using a camera-based system would be best, despite the obvious benefits of LiDAR and radar technology. Is Tesla onto something here? 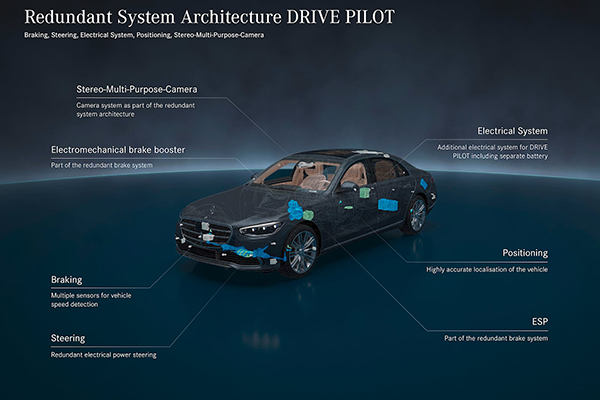 According to Mercedes-Benz, the answer is no. The German automaker feels that conditionally automated driving, otherwise known as Level 3 semi-autonomous driving, should have numerous fail-safes built in to enable “safe control of all situations that could potentially arise.” Indeed, if a camera-based “self-driving” system fails, you’ll feel much safer if there is a backup system of some sort.

To maximize safety in cars with Level 3 tech, Mercedes has incorporated redundant architecture encompassing the braking system, steering, power supply, and some sensors for environment recognition and handling. 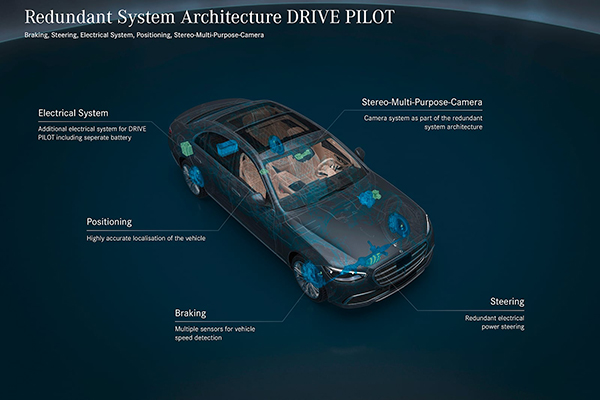 Mercedes specifically draws attention to aspects of the sensor system that are “mutually collaborative.” Unlike Tesla, which uses only cameras, Mercedes Drive Pilot uses optical, ultrasound, and radio wave technology to detect obstacles. With radar, camera, and LiDAR systems aboard, plus ultrasound, moisture sensors, and even microphones, the Mercedes system is better able to evaluate the road ahead no matter the conditions. With more than 30 sensors working at all times, Mercedes is able to ensure safety even if something fails.

In addition to providing a fail-safe in the event of a sensor failure, the additional components can make up for each other’s shortcomings. Mercedes chief technology officer Markus Schafer explains why the automaker is cramming so much tech into Drive Pilot-equipped vehicles:

“We are convinced that redundancy is the right approach for Level 3 automated driving and beyond. When it comes to sensors, we also see the use of LiDAR alongside radar and cameras as particularly indispensable. We can compensate for the situation-dependent deficits of one sensor with the characteristics of another. Relying on just one type of sensor would not meet Mercedes-Benz’s high safety standard.”

Drive Pilot has been available in the Mercedes-Benz S-Class and EQS since 17 May 2021 in Europe, making the automaker the first worldwide to receive internationally valid system approval for Level 3 driving, but the pre-installation of the brand’s Intelligent Park Pilot is already taking things further so that fully automated driverless parking under Level 4 tech will be possible. 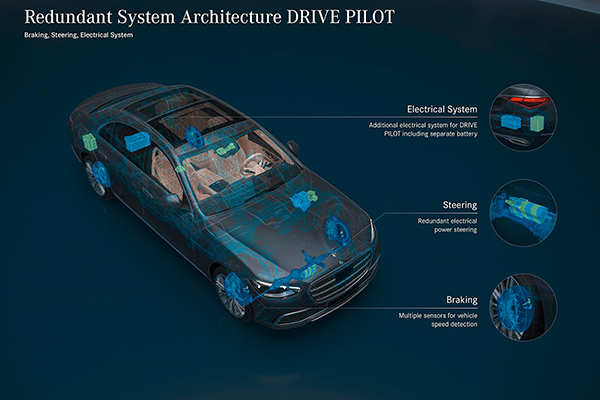 As things stand, the Level 3 system controls speed and distance and keeps the vehicle in its own lane. When the conditions allow for it, the car can drive itself in traffic at speeds of up to 37 mph. Should one of the primary systems fail, Drive Pilot recognizes the issue and will “facilitate a safe handover of control to the driver.” If the driver can’t take control because of a medical emergency, for example, a safe emergency stop maneuver is initiated “that does not pose a risk to traffic following behind.”

While there are sure to be some who are willing to risk trusting a system with no backups or fail-safes in place, we think Mercedes is setting an example that all should follow, Tesla included. Perhaps that’s why Mercedes is the only brand willing to accept blame for an incident while Drive Pilot is active and why it’s paving the way for Level 3 autonomy in US legislature.