First seen in 1999, the C215 Mercedes-Benz CL stunned the world with a plethora of technological innovations and svelte styling. The coupe replaced the imposing C140 series and, like a gust of wind, breathed new life into the two-door lineup. It went like the wind too – especially in CL55 and CL65 AMG guises.

They weren’t the only AMG-fettled CLs to leave Affalterbach, though. For a short period in 2001, Mercedes produced 26 examples of the CL63 for special customers. Unlike similarly badged AMG models, this little-known rarity is powered by a naturally aspirated 6.3-liter V12 based upon the M137. At the time, it was the most powerful CL-Class money could buy.

If you’re looking to own one of the rarest AMGs ever made, here’s your chance. This German unicorn will be auctioned off later this week and is estimated to sell for between £20,000 and £25,000 (approx. $24,000 and $30,000). Classic Car Auctions notes the Big Benz recently received a £25,000 restoration to bring it back to showroom condition. 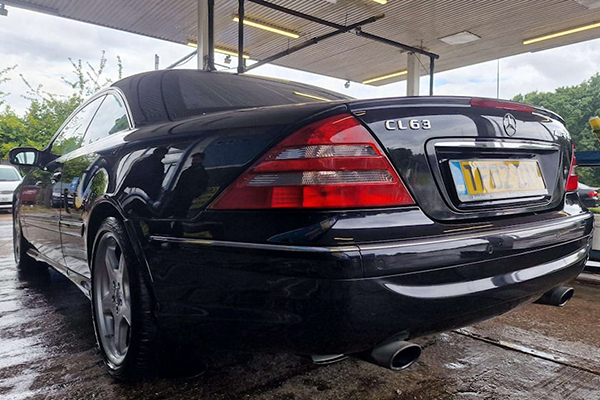 Unlike contemporary Mercedes-AMG vehicles, the CL63 has an air of restrained menace about it. There are no superfluous styling gimmicks or aggressive accouterments; no, the C215 comes from a time when Mercedes-Benz still made graceful grand tourers. That’s not to say there aren’t any sporting add-ons, though.

The CL63 wears a subtle aero kit, enlivened by the gorgeous five-spoke AMG alloy wheels. Other than the subtle CL63 badging affixed to the rear, there’s very little to clue other road users into just how special this motorcar is. The outputs afforded by the tuned V12 are still pretty impressive – there’s 444 horsepower on tap and a whopping 538 lb-ft of torque being sent to the rear wheels via a five-speed automatic gearbox. 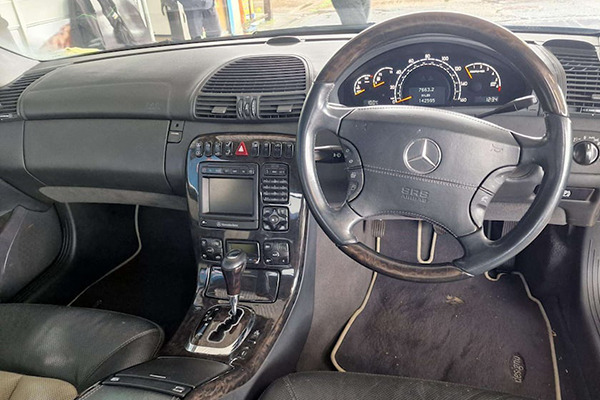 This is no track-day special, though. Remember, the CL is essentially a two-door version of the S-Class sedan and, as such, is blessed with a flotilla of features.

Inside, you’ll find all manner of goodies. Despite being 21 years old, this classic AMG boasts voice control, soft-close doors, radar-guided cruise control, and – a delightfully retro touch – a carphone. The seats are heated, ventilated, and even have a massage function. Speaking of the seats, this particular CL63’s pews aren’t trimmed in run-of-the-mill leather upholstery.

Inside, you’ll find the original owner specified the Designo (now known as Manufaktur) treatment – a very pricey option back in 2001. The Designo Navy Blue and cream leather work beautifully with the wood trim, which has been applied liberally. Mercedes-Benz has a rich history of producing fine grand tourers and this CL63 exemplifies that.

While the estimated selling price is surprisingly low (considering the rarity) we must warn you that this era of Mercedes requires deep pockets to keep them going smoothly. Still, for the right buyer, this could be the steal of the century.