Benz Patent Motorwagen lapping the Nurburgring? Well, that would be a sight to behold. While Mercedes-AMG has the 4-Door Coupe holding the record for the fastest series production 4-door at the Green Hell, how long would the first-ever car take?

The Benz Patent Motorwagen is the first carriage with no horse traction. Karl Benz built it back in 1886 and his wife, Bertha, started out from Manheim to Pforzheim with the couple’s two sons. Not only did she reach her destination, her parents’ house. But she also managed to return back home.

The Patent Motorwagen was not designed as a sports car, but as the first-ever car. Now it hits the Nurburgring in a virtual lap. YouTube sim racer and IRL race car driver Jimmy Broadbent took the vehicle to the racetrack. The project took ten months to complete and user SATBLAB was the one responsible for the success. He was the one to faithfully recreate the car. 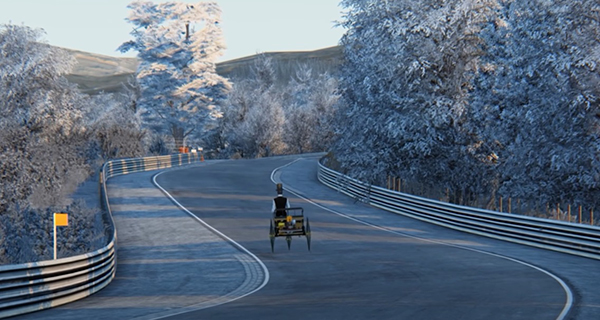 The car sports one horsepower in the game. If it had any less, it wouldn’t have been able to move at all. The real deal had only two-thirds of a horsepower (0.4 kW). These parameters helped roll with a top speed of 13 km/h (8 mph). That is snail speed for the 21-kilometer (13-mile) long racetrack, where ferocious cars and highly-skilled drivers put their abilities to the test.

When going downhill, the three-wheel Benz Patent Motorwagen speeds up thanks to gravity, even hitting 70 km/h (43 mph). Karl Benz would have never dreamed of reaching such speeds. Going uphill though is torture. The vehicle simply stops in steep inclines.

But it eventually manages to put an end to all this… persecution after spending over 80 minutes on a lap on the Nurburgring. 135 years later, the Mercedes-AMG GT Black Series covered the same route in about 6 minutes and 43 seconds. Times have changed.