It was 1886, the birth year of the automobile, the year when Carl Benz submitted the patent for his first motor car, at the Imperial Patent Office in Berlin. It was a three-wheeler with a gas engine, the first vehicle to have an internal combustion engine and electric ignition. Now you can admire it in this LEGO version. 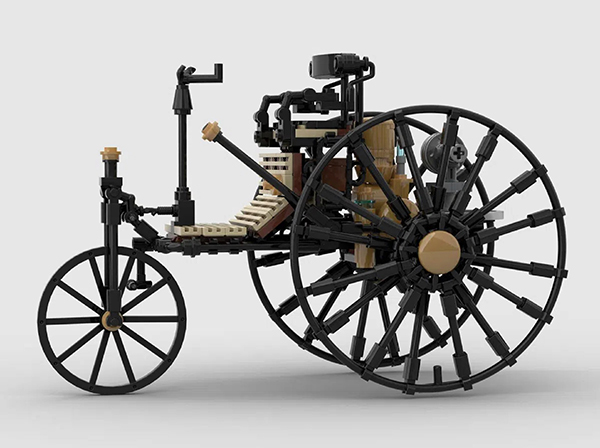 The Benz Patent-Motorwagen (patent motorcar) came with a driving power provided by a small gas engine of any system, with the gas being made from ligroin or other gasifying substance, as explained in the patent, shared on the Mercedes-Benz website.

All the parts of the Patent Motor Car were matched to each other to form a single unit (engine, chassis, drive components). The chassis was made of bent and welded steel tube and the engine weighed around 220 pounds (100 kg), which was considered light back then. It took around 2.6 gallons (10 liters) for the car to cover a distance of 62 miles (100 km).

Honigbaer is a LEGO maniac and motorhead who wanted to take a shot at the Patent Motor Car and built it out of LEGO pieces. And he pretty much nailed it.

His model is a 1/14 scale reproduction and the most challenging part was to keep the lightness and intricacies of the original design, as admitted by the LEGO builder.

Honigbaer strived to keep the measurements as close as possible to the original Benz and managed to capture the curved steel-tubed body structure of the car.

You can support his project on the LEGO Ideas website, where LEGO allows people to submit any type of LEGO project, in the hope that it will be picked up and turned into a mass-production set. In order for that to happen, you have to raise 10,000 supporters in a given timeframe. Honigbaer has raised over 2,700 so far, with almost 200 days left.