In this video, we will be having a walk around showing you the Exterior and Interior features of the all new Mercedes Benz Maybach Project MAYBACH! A humble contribution to Virgil’s vast legacy, the Mercedes-Maybach show car exemplifies the possibilities of future design and is the result of an on-going co-operation with the polymath artist, architect, creative director, fashion designer and philanthropist; driven by a shared passion to enrich the conversation around luxury design.

In December of last year, Maybach revealed a stunning concept car. It looked unlike anything the brand had ever launched before, but it wasn’t a preview of a future production car. It was called Project Maybach, and a new video from the Mr. Benz YouTube channel gets up close with the large, high-riding luxury vehicle.

Famed fashion designer Vigil Abloh collaborated on the Maybach alongside Daimler design chief Gorden Wagener before Abloh’s unexpected passing late last year. The car, built from scratch, is stunning to look at, and the video provides a thorough walkaround of the luxury coupe inside and out.

The car is massive, something that doesn’t translate well through the press photos. However, it looks huge in the video, and you can hear an echo in the cavernous cabin. Abloh and Wagener had complete creative freedom in designing the concept, which is an electric vehicle. However, it’s not really designed to be driven, even though that’s possible. 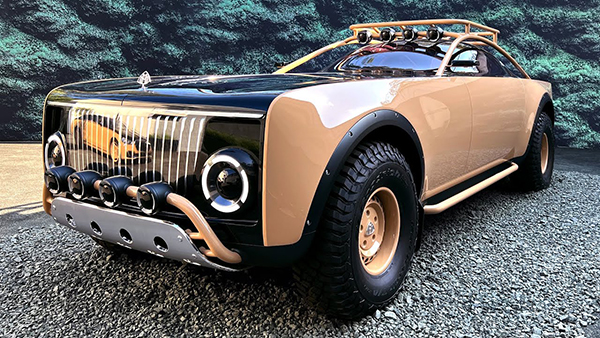 The two-tone exterior is stunning, and the replicated design motif on the front and rear fascias bookend bold styling choices. The curvy glass top and brown roof cage add to the coupe’s off-road aesthetic, which includes massive tires with a copious amount of tread, tough-looking side rails, and bolt-on fender flares that are attached with Maybach-branded fasteners.

The video also shows off the leather-bound interior and other styling treatments, like the dashboard controls, infotainment screen, and the various tools strapped throughout the interior. The video even shows off the Maybach-branded ax that looks like a neat piece of kit.

While it’s sad that something as audacious as Project Maybach will never see production, Mercedes has another Abloh creation you can own. It’s a two-tone Mercedes-Maybach S680, and just 39 are planned to reach the American market. The S680 sports the same color combination as the concept, pairing it with gold rims, though it lacks the concept’s off-road capability. The interior is swathed in brown leather, too.