At the virtual Investors meeting on October 6, 2020, Mercedes announced that in addition to the EVA platform for higher class models, it will also develop the MMA platform for compact models. It seems that MMA platform will debut in 2024, a year earlier, and the first model on this platform will be a new kind of car, a limousine-SUV named Mercedes SUL (Sport utility limousine). 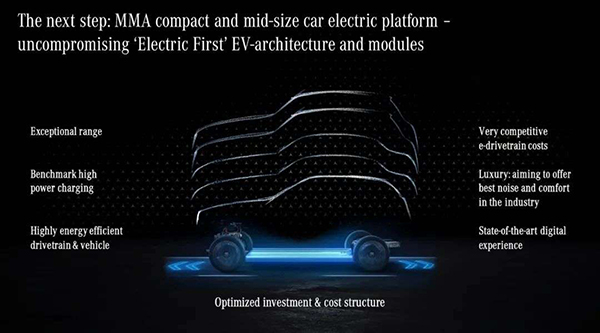 The October 2020 event outlined Mercedes’ main lines of development for the next 10 years.

We have also reported extensively on this virtual meeting in which several important decisions have been made:
– AMG, Maybach and G-Class will be electrified in the coming years
– By 2025 the number of thermal engines will be reduced by 40% and this percentage will increase to 70% by 2030
– The savings made will be invested in the electric range. Mercedes wants to reach 10 electric models and 20 PHEVs in 2025 and more than 20 electric models in 2030 while the number of PHEV models will decrease.
– Also at that meeting it was decided that in addition to the EVA platform, Mercedes will develop a dedicated electric platform named MMA for the compact models of the brand.

The first conclusion was that the MMA platform will be dedicated exclusively to the compact range.

But the German magazine auto motor und sport suggests that the MMA platform will also be used for a future C-Class electric. The EVA platform will be designed exclusively for the expensive EQS, EQE and the two EQE SUV and EQS SUV models. 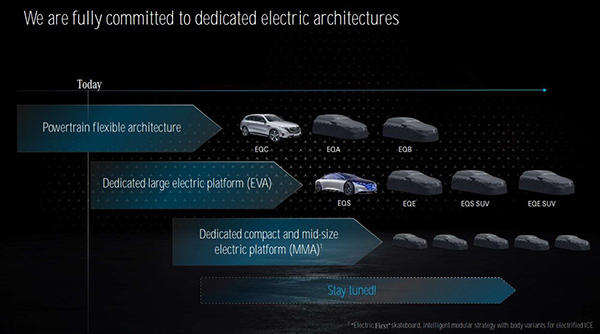 Which will be the first model to appear on the MMA platform and replace the current MFA II platform? The German magazine motor motor und sport says that the first model on the MMA platform will be a new kind of car: a SUV limousine that Mercedes named Sport Utility limousine. So, after the SUV-coupe comes the SUV-limousine. It is set to debut in 2024, a year earlier than announced at the investor meeting.

Mercedes gave the first impression of what a limousine SUV could look like when it presented the Mercedes-Maybach Ultimate Luxury concept at the 2018 Beijing Motor Show.

Then, gradually, Mercedes will replace the current compact range. The MMA platform is designed essentially for electric propulsion just like VW’s MEB. However, the big surprise is that MMA is more flexible than MEB from VW because it will be able to accommodate a small heat engine as a range extender for markets where the network of stations is poorly developed or as a conventional engine for a PHEV propulsion.