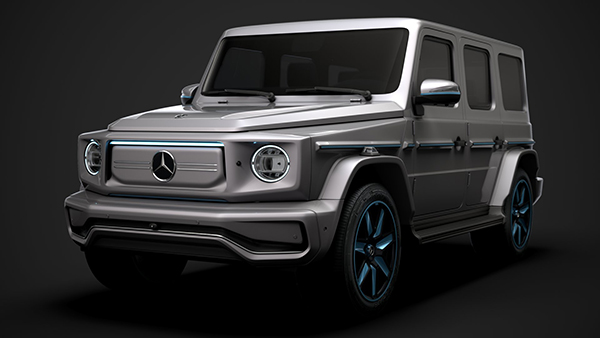 As with the Mercedes EQE and EQS, the Mercedes EQG will be offered in two power and battery versions. According to the german magazine auto motor und sport, the Mercedes EQG will not use the MEA platform from EQS nor the MMA that will be introduced in 2024. But it will have a revolutionary propulsion system with four electric motors, one on each wheel. In this way it will be possible to simulate even the operation of the three lockable differentials from the conventional G-Class.

The Mercedes EQG, the electric version of the G-Class, will be presented as a concept in a few days at the Munich Auto Show (IAA) and the world premiere will take place in 2023. Sales will begin in 2024.

Daimler CEO Ola Kallenius has announced since the October 2020 general meeting of shareholders that Mercedes will focus on expanding the AMG, Maybach and G-Class subbrands and that the G-Class will have an electric version.

This year in July, Mercedes revised its electric strategy and announced that it will give up the thermal engine in 2030, 9 years earlier than the first prediction, and that in 2025 50% of sales will be electric and electrified models compared to 25% as originally planned.

But few know that the idea of an electric G-Class dates back to 2018 when former Daimler CEO Dieter Zetsche made a vague promise to then-California Senator Arnold Schwarzenegger for a future electric G-Class. And Gunnar Guthenke, the former project manager of G-Class declared in the German magazine auto motor und sport in March 2018 that a body structure with a separate chassis would be ideal for battery placement.

In terms of design, the differences between Mercedes G-Class and Mercedes EQG will not be very big. The square shape of the body will be kept, but the front part will respect the line of the electric models from the EQ range.

An electric Mercedes G-Class is welcome because the conventional model upsets the emissions balance due to large engines with high consumption. With the launch of the Mercedes EQG, Mercedes could achieve a balance in terms of emissions and could continue to sell conventional versions in parallel.