Mercedes-Benz first introduced an all-electric bus for the Brazilian market last year and is now nearing a date for manufacturing to begin with its sights set on November or December. 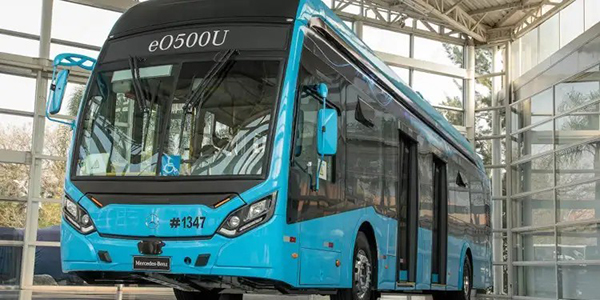 The battery-powered eo500u city bus stands for environmentally friendly, locally emission-free, public transport and contributes to air pollution control, thus increasing the quality of life according to the company’s website. The bus was specifically designed for Latin American cities and has a range of 250 kilometers (155 miles). Demand for electric city buses is expected to reach close to 3,000 units by 2024. Reuters reports that most of the new vehicles are expected to operate in Sao Paulo as the city hopes to have 2,600 electric buses by 2024.

The battery charging system is a plug-in system the company has incorporated in other Daimler fully electric Mercedes-Benz buses for eCitaro city buses and takes about three hours to fully charge the high-powered batteries.

The fully electric e0500u bus chassis will be produced in the Brazilian city of Sao Bernardo do Campo southeast of Sao Paulo and launched in November or December. The eo500u is a variant of the O-500 series, which is also the basis for the Mercedes-Benz Super Padron City bus. The low-floor vehicle can accommodate bus bodies up to 13.2 meters (43ft.) in length with a capacity of up to 86 passengers. The chassis, with wheel hub motors mounted on the rear axle, was completely developed in Brazil and tested extensively by Daimler engineers in Brazil and Germany.

Mercedes-Benz do Brasil is the largest bus an truck manufacturer in Latin America. The Sao Bernardo do Campo plant opened in 1956 and specializes in the development and production of bus chassis.

Mercedes will be competing with Chinese bus manufacturer BYD and others for a share of the growing Latin American market for electric buses. BYD supplied its first articulated buses to the Brazil’s first all-electric bus corridor in the city of Sao Jose dos Campos last October.