The Citan Tourer is targeted as a lifestyle vehicle when compared with the forthcoming T-Class MPV, and its van roots certainly show through. However, the new Citan has seen a significant improvement in its materials, refinement and how it drives, so that’s no hardship in the slightest. If you’re in need of spacious transport that can withstand the punishment of family life, and adds a bit of tech to the mix, then it’s well worth considering.

A new-generation Mercedes Citan small van is on the way, and with it comes a new MPV, called the Citan Tourer. We’ve driven the passenger carrying variant ahead of its arrival in the UK in mid-2022.

The new model continues where its predecessor left off, so while there’s a three-pointed star on the nose, the Citan Tourer shares more with the Renault Kangoo than other models in the Mercedes passenger car range. However, this generation is all-new from the ground up, and the improved refinement and comfort found in the new panel van is carried over to this passenger carrying model.

The arrival of the new Citan also sees the debut of the Mercedes T-Class. As Mercedes has done with the medium-sized Vito van and V-Class MPV, the T-Class is a more premium model based on the van body. This means the Citan Tourer has a more practical edge to put some distance between it and the new car.

To that end, the Citan Tourer has fabric seats and plenty of black plastic trim inside, although Mercedes’ circular air vents add an upmarket feel, and while the optional 5.5-inch touchscreen is small, it has clear graphics and plenty of connectivity options, including ‘Hey Mercedes’ voice control. That screen is small enough to ensure that the controls for the air-conditioning and shortcut buttons are still physical switches, although the latter in particular feel rather plasticky in their operation. 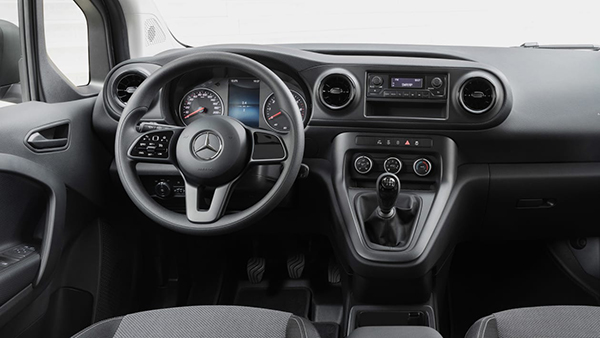 Where the Citan Tourer really shows its van roots is with the space on board. It’s currently only offered as a five-seater, and space in the back row is generous. There’s no sliding function, but legroom is good, and that tall roof means head space isn’t an issue at all, while the sliding doors make access a doddle in even the tightest spots. The back row folds in a 60:40 split, and the seats collapse in one move, as the bases drop and the backs fold forwards.

Our European-spec Citan Tourer featured asymmetric barn doors at the back, but a more useful top-hinged tailgate will also be available, which improves the view out of the rear window, too. Open up, and you’re greeted by a large, carpeted, cube-shaped cargo area that offers 520 litres of space under the load cover. When the longer model arrives in the middle of 2022, this will offer even more usable space. 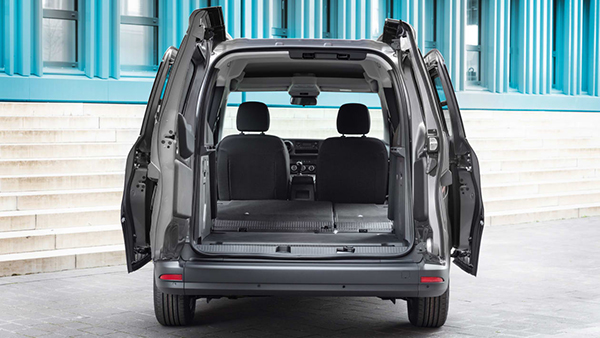 Petrol and diesel engines are available from launch, with the all-electric eCitan coming in 2022. We drove the mid-range 110 CDI model, which offers modest performance from its 94bhp engine, although with 260Nm of torque from 1,750rpm and a slick shifting six-speed manual gearbox, there’s enough pulling power on offer to allow the Citan to keep pace with traffic easily.

It runs out of steam the faster you go – 0-62mph takes a lethargic 15.5 seconds – and there’s plenty of engine noise when the revs rise, but refinement is pretty good once you’re up to speed. The six-speed gearbox helps to keep revs down at lower speeds, so urban refinement is good.

The suspension also does a pretty good job of smoothing out the ride. Even big bumps are shrugged off pretty easily, and the car is no doubt helped by the modest wheel sizes on offer. All this comfort is good, but the payoff is that you could hardly call the Citan exciting to drive – it gets the job done, rather than offering anything like excitement.