Along with the new C-Class, Mercedes introduced the new modified 2-liter diesel OM654. It has an increased displacement from 1950 to 1992 cm3 by increasing the stroke from 92.3 to 94.3 mm. Also the injection pressure was increased from 2500 to 2700 bar. All three diesels have a mild hybrid system with integrated starter generator (20 HP, 200 Nm) and 48V network . Mercedes has invested 3 billion euros in the new diesel and hopes that the end of the diesel engine will be far away. 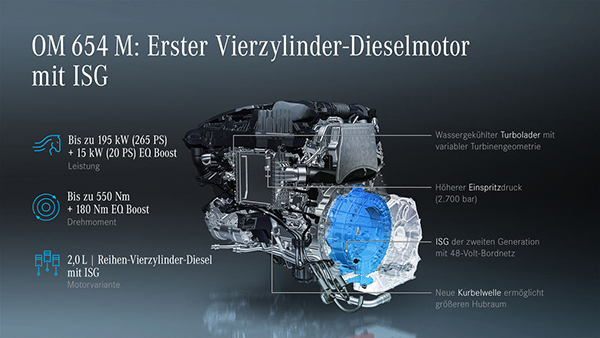 The top M254 petrol engine develops 258 HP and 400 Nm. It has an overboost function that offers an additional 36 HP for a short period of 30 seconds. The mild hybrid system and the 48V network are also on board of the M254 engine. The top models C 43 and C 63e will follow later, but they will also have engines with only 4 cylinders.

Mercedes C 300 e with 313 HP and 550 Nm
Later this year will follow the plug-in version Hybrid Mercedes C 300 e with 95 kW electric motor and electric range of up to 100 km. C 300 e will deliver a total of 313 hp and 550 Nm. This propulsion system had been prepared for the E-Class facelift but gave up at the last minute. That’s why the new PHEV system is now making its C-Class debut.

What is no longer offered at C-Class? The air suspension for which demand was too low, the six-cylinder engines due to emissions and the Mercedes star on the hood.

However, there is an air suspension at the rear axle for the T-Model and the PHEV sedan offered as standard.

Optional: adaptive suspension and all-wheel drive in which the rear wheels rotate counterclockwise from those in front at less than 60 km/h at an angle of 2.5 degrees. Thus, the turning circle is shortened by 43 cm to 10.64 meters.

Mercedes is working to improve the PHEV system. The goal is to reach an electric range of 150 km. For this purpose, you need a larger battery that will have to be moved from under the trunk into the floor of the car. But this requires a new platform. Mercedes is considering offering a single platform instead of the three existing MFA, MRA and EVA. This unique platform could be adapted for both conventional and electric propulsion.