I set out wanting to render a new Mercedes-Benz CLC. Then I thought this looks more like a 3-door A-Class. With those frameless doors, I’ve decided to call this the Mercedes-Benz A-Class Coupe.

Slowly but surely, the coupe began to lose ground in favor of the more functional designs, and people even had to come up with such atrocities as “four-door coupe” or “coupe SUV” to keep the name alive. However, the classic recipe of taking a sedan, removing the rear doors, and sloping its roofline a little toward the back seems to be living what could very well be its last days.

The moment of complete disappearance doesn’t seem in sight since we have brands that essentially rely on this type of body style, yet its decline is evident. It’s even more obvious toward the lower end of the market where manufacturers have steered clear of coupes, spurred by the apparent lack of interest from the public. 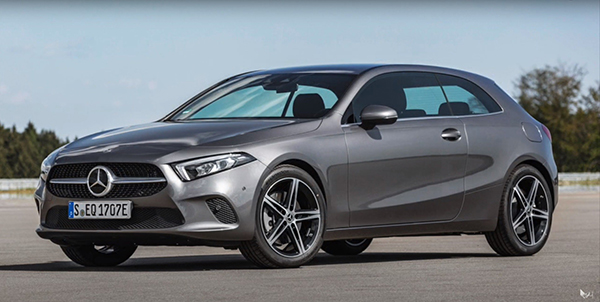 But why have people moved away from the idea of owning and driving a coupe, opting instead to buy SUVs and crossovers, for instance? It could very well have to do with what driving has become for most people: not so much a source of enjoyment as an actual necessity. When you’re gridlocked, the car you drive is pretty irrelevant.

Take Volkswagen, for example. The German brand tried to resurrect the Scirocco nameplate in the late 2000s and, despite making a more than decent car of it, the modern version never received a second generation. And then there’s the Golf. Not only does the world’s most famous hatchback come in a five-door configuration only these days, but so do the performance-oriented versions, the GTI and the R.

Do people really not need coupes in their lives anymore? Well, looking at this Mercedes-Benz A-Class conversion from the real five-door version to a three-door one (not exactly a coupe, but the term has become pretty murky lately), we get to see one more reason why the latter is quickly losing ground to the former. The gains in styling points just aren’t that great.

Looking at the two, you feel like the little you gain by deleting the rear doors and, as is the case here, the B-pillar (a bit optimistic, if you ask us), is nothing compared to the disadvantages. Try loading a child in the back without proper doors and the herniated disk you got from moving the truckload of stuff you need to have with you every time you go out of the home whenever a kid (or, God forbid, two) comes along. It’s not fun.

OK, maybe you don’t have kids, but then there’s a strong possibility you still have friends. Taking more than one of them with you is an entirely new type of pain in the tushy because it requires top-level logistical skills. Make sure to load the people in the back first, but put the smaller ones there because there’s not that much headroom. Also, make sure the one with the smallest bladder sits in the front on longer trips, or stopping to take a leak might become uncomfortable for more people than it should.

We will give this Mercedes-Benz A-Class Coupe transformation credit for moving the license plate from the tailgate to the bumper. That’s actually a cool touch that Mercedes could take notice of. Other than that, we’re not exactly convinced. Designers these days have no problem mixing attractive looks with practicality, which means that coupes are basically losing at least half of their “raison d’être”. In a market as competitive as today’s, that’s more than enough to get the ax.