Two Russians decided the S-Class hasn`t had its best day yet, so they took one off-road. They didn`t climb a mountain with it or tested a new trail, but the luxury car had to endure some harsh treatment.

In what might remind some of us of Tax The Rich`s habits of showing off the abuse some stars like the Ferrari F50 had to endure, these two guys managed to put an Mercedes-Benz S-Class W223 in an environment that nobody ever should visit with such a car. But, hey, we don`t make the rules!

The car they took to the mudders had, of course, no number plates. The video begins calmly, but that changes fast. The black S-Class is being slowly taken off the tarmac and send straight into action. The driver tests the cars traction with some donuts and here it can clearly be seen how the rear axle is trying to cope with all that “fun.”

Showing no signs of distress, the car is then taken on a different path. This time the new S-Class has to manage an increasingly difficult path and the guys even attempt to launch it. The driver takes the diesel-powered sedan forward and you can hear how the floor is being scratched in the process. Positioned sideways, the S-Class`s all-wheel-drive system struggles to keep the car moving forward. 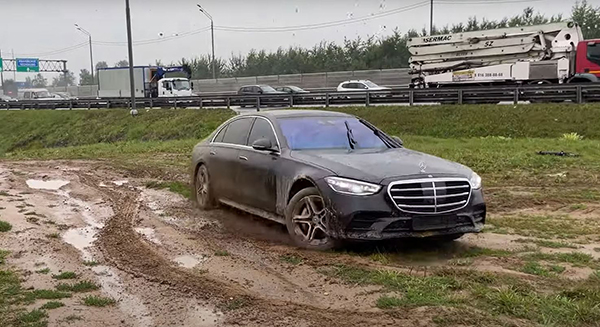 The Russians don`t give up and after this put the car to the next challenge. The W223 has to climb on another dirty, muddy road. Surprisingly, the 10 degrees rear-wheel steering system kept working!

They even film themselves getting inside of the car with dirty boots and you can hear them sighing ironically. The stress test continues, while just besides them the traffic is worsening. People surely watched.

They end the hardcore test with some more donuts and continue to drive off the tarmac. What a day!