Carrying an impossibly long name, the Mercedes-AMG GT 63 S E Performance leads the way for Affalterbach’s electrified performance revolution. The One hypercar with its hybrid V6 is coming this year when we’ll see the C63 with a four-cylinder engine and an electric motor. 2022 will also bring us another go-faster PHEV, the next-generation S63. It won’t be the only model in its segment since it’ll do battle with the BMW M760e unveiled yesterday. 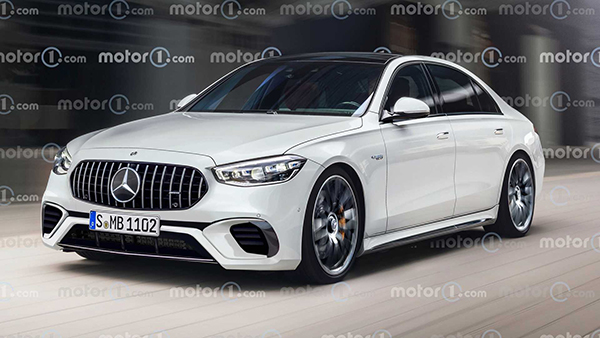 While the M car has an inline-six engine, the forthcoming AMG S63 is expected to feature a big ol’ V8 at the heart of a PHEV setup. Prior to its debut scheduled to occur sooner rather than later, we’ve decided to render the super sedan. It wasn’t all that difficult since spy shots of barely camouflaged prototypes left little to the imagination. In typical AMG S-Class fashion, the S63 will get somewhat subtle sporty visual upgrades over the Benz and Maybach flavors.

The Panamericana grille and quad exhausts will be the most obvious changes over the normal S-Class, but there will be more to the AMG S63 than that. It’ll sit closer to the road and pack some chunky brakes to handle all the power coming from the PHEV V8. Speaking of which, the electrified luxobarge is said to offer roughly 700 hp.

There are mumblings of an even more potent model, presumably, an S73, complete with around 800 hp to make people forget there once was a V12-powered S65. However, it’s worth noting the twelve-cylinder engine is still available, but only in the Maybach S680 as well as the S-Class Guard armored saloon.

Should the rumors about its output pan out, the S63 will be substantially more potent than the M760e with its 571-hp punch. Much like the BMW and its 50-mile electric range, expect the fullsize AMG luxury sedan to have a zero-emissions mode.

With the AMG C-Class and S-Class going hybrid, chances are so will the sporty E-Class programmed to arrive before 2025. In fact, a recent report from Autocar indicates the E63 will also switch to an electrified four-cylinder as its smaller brother, but nothing is official at this point.