Back in 1997, the Mercedes-Benz A-Class famously failed the moose test by tipping over before entering the final straight section, prompting the company to issue a recall after first attempting to deny there was a problem.

Twenty-four years have passed since then, but the memory of that incident is still pretty fresh since it has gone down in history as one of the greatest scandals, right there behind the Takata airbag situation and Volkswagen’s Dieselgate emission cheating fiasco.

If we haven’t forgotten about it, it’s hard to imagine the people at Daimler, Mercedes-Benz’s parent company, have either. Then why does it seem as though they’re preparing to repeat the same mistake, only this time with a much larger vehicle?

The vehicle in question is a Mercedes-Benz Citaro bus that’s had five solid-state batteries weighing roughly 1,100 lbs (500 kg) each mounted on its roof. That sounds extremely counter-intuitive and seems to go against everything we’ve come to know about EVs in the relatively short time they’ve been around. And, to make matters even worse, putting the batteries there makes the bus, now called “eCitaro,” even taller. 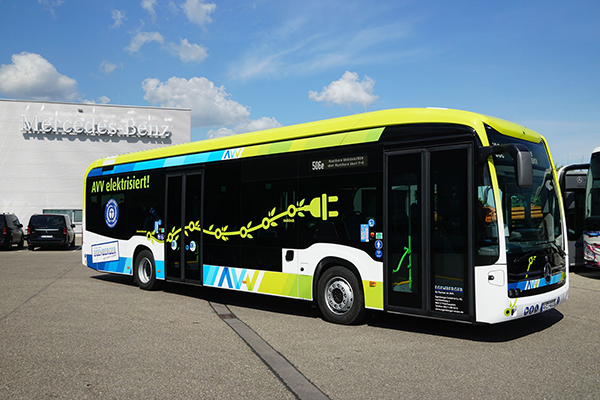 Believe it or not, that’s actually a brilliant idea. The team’s goal was to keep the bus floor as low as possible to make getting in and out simple for everyone (including people in wheelchairs). They also planned to make as few modifications to the layout of the bus as possible so that their customers, who also own conventionally powered Citaros, would feel familiar around the eCitaro.

The only place left where they could cram the battery was the engine bay, which they did. They fit two units as well as all the other paraphernalia that comes with EVs in there, but they needed room for more. With the roof the only option left, they needed to find a way to make sure the bus doesn’t tip when it enters the first roundabout.

The solution is pretty straightforward, especially since Mercedes-Benz already uses something similar for its cars. All it needs is an active suspension that detects when the bus is about to tilt and works to keep it in a perfectly upright position. Problem pretty much solved.

The eCitaro actually comes in different configurations and with different types of batteries, but the one featured in the clip below has a total of seven solid-state batteries for a combined capacity of 441 kWh (63 kWh per pack). That’s enough to give the eCitaro a top range (with two-thirds of the maximum load onboard) of 186 miles (300 kilometers) in ideal conditions, and 106 miles (170 kilometers) in the worst possible scenario (think heavy winter).

The solid-state batteries favor a greater maximum range and get better longevity, but they do have one downside: low charging speed. The Mercedes-Benz eCitaro can only charge at a maximum rate of 88 kW, which is way lower than the 350 kW that some EVs accept these days. That makes solid-state technology unviable for passenger cars that rely on quick charges to continue their journey, but for a bus that charges overnight at a depot, it’s not a problem.

Mercedes-Benz is already selling the eCitaro to various municipalities across Europe, and it looks like the company is heavily invested in advancing the technology even further. It also seems to be on the right path, though you have to wonder just how much more expensive the eCitaro is compared to its diesel-powered equivalents. That massive battery can’t come cheap, so it seems like operating all-electric buses is still the appanage of rich cities.