The Mercedes E 60 AMG is one of the rarest Mercedes models ever produced. According to experts, only 148 units were officially modified by AMG. One of them is at the Țiriac Collection, the collection of classic cars of the former tennis player Ion Țiriac, and we had the opportunity to drive it exclusively. 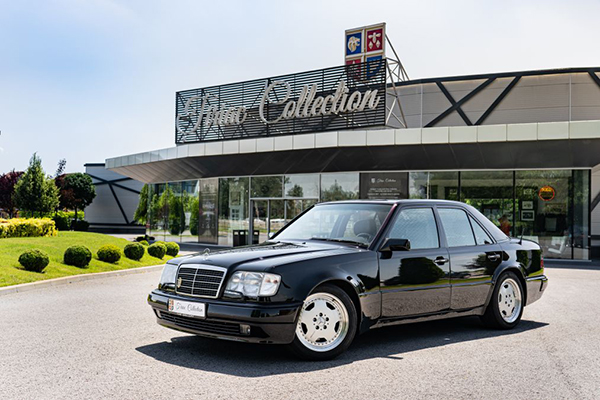 Today, Mercedes and Porsche are fierce rivals, especially since AMG began to develop its own models that directly attack Porsche, see Mercedes-AMG GT and Mercedes-AMG GT 4-doors coupe. But it hasn’t always been that way. In the early 1990s, the rivalry between Porsche and Mercedes significantly depressed. That was because the AMG division was still independent. Mercedes acquired 51% of AMG on January 1, 1999, and, on January 1, 2005, bought the rest of the shares, becoming 100% owner of AMG).

Porsche produced Mercedes E 500
Therefore, the common interests of those two brands in those years led to unique situations. So was the case of the Mercedes 500E. Mercedes needed a sports limousine, AMG had other plans. Porsche was going through a deep crisis, needing to replenish its production capacity in Zuffenhausen. Thus, in 1988, Porsche won a contract for “the design and development of an experimental series based on the W124”. The car was to receive the M119 engine, a 5-liter V8 with four valves per cylinder, from the SL R129. The unit developed 326 HP and 480 Nm (30 Nm more than the 500 SL). The model bore the 500E designation. It rolled off the assembly line from the spring of 1991 to April 1995 in 10,479 units. Since 1994, the name turned into Mercedes E 500, with the arrival of facelift of the entire E-Class range.

From outside, the Mercedes E 500 and E 60 AMG are very similar with significantly flared wings in comparison with the standard W124 E-Class. This was the reason why Mercedes could not produce the car on the Sindelfingen production line. It simply was too wide for the line. Also, the sports suspension lowered the ground clearance by 23 mm. 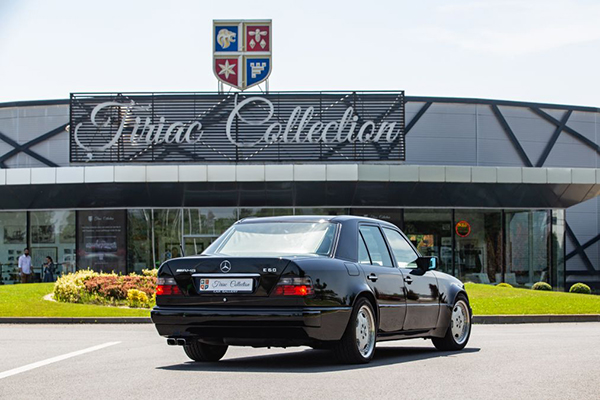 Difficult production process of the sports sedan
The logistics of the production process was cumbersome. Mercedes delivered the body parts from Sindelfingen to Zuffenhausen. Porsche assembled them together with new parts, such as the wider wings, of its own production. The assembly took place in the historic Red Brick Reutter building, where Porsche once made bodies for 356 and various generations of 911. Then the bodies returned to Sindelfingen, where they were painted. And then they hit the road again, from Sindelfingen to Zuffenhausen, for the mounting of the engine with the auxiliary systems, the exhaust and the suspension.

Porsche was responsible for the acoustics, vibrations, drive train settings, but also for the braking system. The intake for the aspirated V8 engine was also made through the slots between the body and the headlights. And for a better distribution of weight and because there was not much space under the hood, the battery moved from the engine compartment under the trunk, on the right side. Porsche also installed a new electrical network, the CAN BUS system, which, at that time, was a great innovation. It is also worth mentioning that the car offers only four seats. That is because, due to the very large differential, there was no room for the suspension of the central-rear seat. It was eventually cut off.

Original Mercedes E 60 AMG features the AMG 957 technology package
AMG anticipated that there would be customers who will replace the Mercedes engine with the AMG engine on their own. In order to differentiate the original factory-modified vehicles from the aftermarket, ones they all have the AMG 957 technology package. The package includes AMG wheels, suspension and exhaust. Another clue is that on the airboxes, the AMG logo shows up, instead of the Mercedes-Benz lettering, as it is on the E 500. Thus, the original Mercedes E 60 AMG models have 17-inch EVO-II alloy wheels, AMG suspension and AMG double exhaust. The braking system is that of the E 500, being already oversized by Porsche to cope with the new power. The AMG engine comes with the same four-speed automatic transmission from the E500, which supports 100 Nm of higher torque. 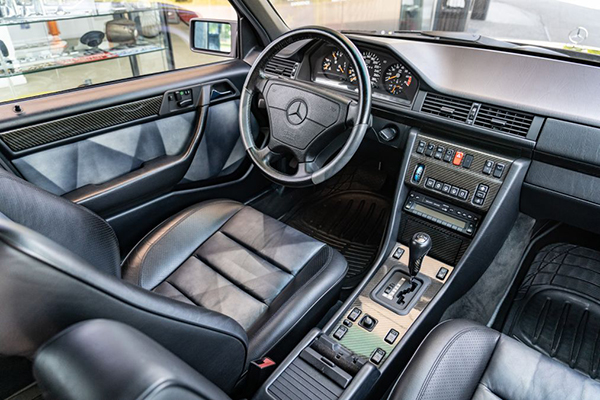 Mercedes E 60 AMG – How does it drive?
How is the driving? When you get on board, the first sensation is a slight fear at the sight of the AMG specific speedometer reads up to 300 km/h. And it’s not just for the artistic impression, because the car can reach 279 km/h, electronically limited speed (295 km/h without limitation), which, for those times, was a great performance. The acceleration from 0–100 km/h lasted only 5.6 seconds. After 20.4 seconds it reached 200 km/h. By comparison, a 911 Carrera 4 (993) picked up 270 km/h and accelerated from 0 to 100 km/h in 5.3 seconds.

The relatively soft seats, dressed in black genuine leather in perfect condition, offers enough lateral support. Meanwhile the steering wheel with a large diameter is typical for the Mercedes of those times. The buttons for opening the windows are on the middle tunnel, behind the gearshift. On the doors, we find in the same position as today, the buttons for the electrical adjustments of the seats. In fact, the car is very well equipped, with air conditioning, cruise control, sunroof, audio system and heated mirrors.

A lot of torque after 3000 rpm, decent sound
You stay in a very low position for a business limousine, engage the first gear of the four-speed automatic transmission and start off. If you push the acceleration hard, you lose the grip immediately. So you have to be careful with the acceleration dosage. But, due to the high torque, you can skid even if you accelerate more suddenly from 60 km/h.

Power rolls off very linearly and, up to 3000 rpm, you wouldn’t say you have an AMG engine under the hood. But beyond 3000 rpm, you can feel the fabulous torque (the maximum value of 580 Nm is at 3750 rpm), and the car shows its sporty values. If you continue to accelerate, you have the feeling that the power is limitless, because the traction force is huge and the engine revs very high, close to 6000 rpm. Yes, you read that right. A 6.0- liter aspirated engine that revs extremely easily up to 6000 rpm!

And you are tempted to accelerate even more, excited by the exemplary stability of the car, which has a sensational road holding. With the three-part 17-inch AMG wheels, the same as the 190 Evo II, E 60 AMG offer a superb compromise between road holding and comfort, even on a road with asphalt joints, the comfort of the suspension being worthy of a Mercedes. The steering is not very assisted. It provides very good feedback and the body roll is low, because AMG installed an even firmer suspension. 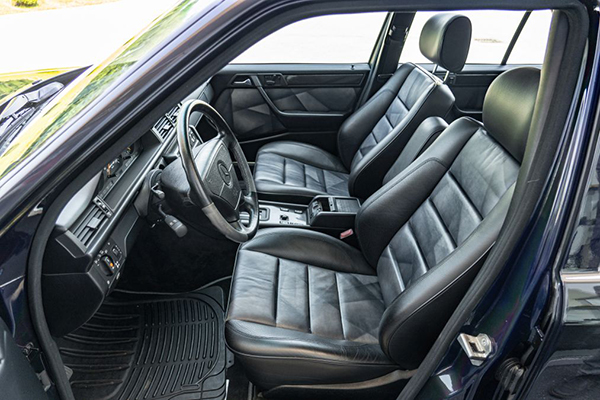 The sound keeps a low profile
With a weight of 1,785 kg, the E 60 AMG does not feel heavier than an AMG E 53 of the current production series. Surprisingly, given that it was an AMG engine, I was expecting a very exciting sound. But this is not the case, because AMG considered that the E60 AMG is first and foremost an executive limousine for long journeys and only then a sports car. That is why the sound is more restrained.