What if the Mercedes-Benz AMG GT was mid-engined? What would that look like? Let’s find out!

What if the Mercedes-Benz AMG GT was mid-engined??

Mercedes-AMG is currently working on two main projects, the next generation of the GT and an SL family of roadsters. But don’t you just wish they’d make a mid-engined supercar instead, one with the fire-breathing 4.0-liter V8 screaming into your ear?

This isn’t part of the Mercedes design language, as nearly all the most famous sports cars made by this manufacturer had long, phallic hoods, from the 300SL to today’s GT. But digital artist wanted to turn car design convention on its head and with a mid-engined AMG GT rendering.

We’ve seen this done before, but this guy has the only car videos on YouTube that are also cat videos; it’s an irresistible combination, and so is a mid-engined supercar. Audi is apparently pulling the plug on the R8, but we have difficulty believing the formula is to blame. Instead, the quattro engineers probably have their hands full with performance EVs like the e-tron GT. 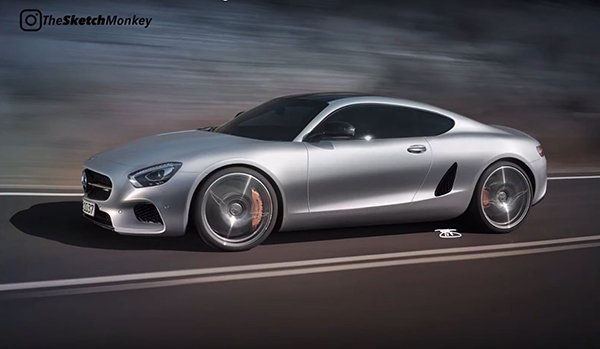 What makes the AMG GT different from its Germanic brothers and sisters is its raw nature, its tendency to be nothing more than a muscle car with class. But America is moving, adapting its Corvette to a mid-engined layout. So why shouldn’t we dream of a 4.0T rival from Affalterbach?

The artist describes this as quite a difficult rendering to pull off. The lines need to flow just right, and apparently, the AMG needs to end up looking like a Porsche Cayman. Yeah, we always knew that was the best mid-engined shape, but the rest of the world might take some convincing.

It’s not a flamboyant car and without the long hood of the normal GT, this supercar might struggle to get noticed. That’s fine if you want to make a Porsche 911 rival, but it’s usually the crazy stuff that sells the best and gets attention. After all the negative comments we got for the Mustang Wagon last week, we can’t wait to see what you guys have to say about the Porsche-shaped AMG.