Kanye West is now in France for Paris Men’s Fashion Week, and he proved once again that he can be quite original… While copying someone else. He and his new girlfriend, actress Julia Fox, made their official red carpet debut together in full denim, channeling the iconic outfits Britney Spears and Justin Timberlake wore over two decades ago.

But before that, just a few days ago, he was out in Calabasas, Los Angeles, enjoying an ice cream. Paparazzi caught up with the rapper-turned-billionaire on his way to his car, which seems to be a new addition to his collection, a custom gray Mercedes-Benz V-Class with Maybach parts. According to the Hollywood Pipeline, he purchased it last week. 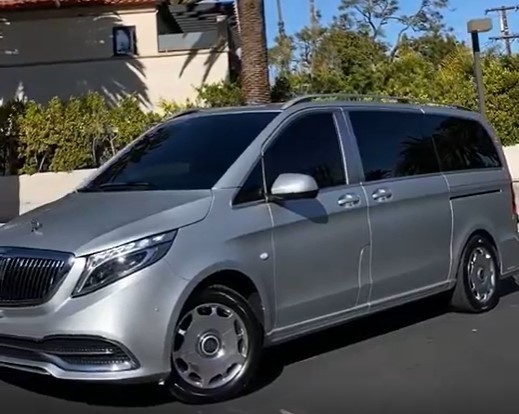 Kanye, now legally known as Ye, seems to have worked with RD Whittington, owner of celebrity dealership Wires Only in L.A. and Miami, which flaunted the marvelous minivans on its Instagram account. With some small differences in the custom prominent rear bumper, the vehicle seems similar to one Wires Only posted a couple of weeks ago. That Mercedes-Benz V-Class comes with a matte grey exterior and there are enough seats for seven passengers on board. There are also TV screens in the headrests in front of them and rear reclining seats. The seats also swivel, so the passengers can face each other.

The one West owns also has a grey exterior paint, and is called Executive Style. According to TMZ, his custom model has a red leather interior and a great sound system that can rival a recording studio (because Ye needs it). It also sports various lighting options, as well as a Starlight Headliner, and has a price of around $400,000.

The entire family seems to have an affiliation with the dealership, because his soon-to-be ex-wife Kim Kardashian also posed with RD in one of the Mercedes minivans (you can check it out in our gallery) and has previously acquired cars from him.