Buying something like a 2004 Mercedes-Benz SL500 at auction can be a risky endeavor. The R230 is known for a variety of issues that can prove to be quite costly if you are paying a shop to do the work. However, if you are mechanically inclined, many of these issues are far less expensive to address. Luckily, the YouTuber known as the Car Wizard is a skilled mechanic, so when he bought “Mrs. Wizard” an R230 at auction for just $5,500, he wasn’t take that huge of a risk.

In the video above, the Car Wizard goes over this 2004 SL500 from top to bottom, inside and out, and he learns that he got a very good deal. He finds quite a few problems that would be expensive for someone who couldn’t do the work themselves, but none of the problems require expensive parts. Since he is doing the labor himself, returning this R230 to factory working order won’t be difficult or expensive.

R230 Introduction
The video begins with Mrs. Wizard introducing us to her new-to-her Mercedes-Benz SL500. She explains that when they first got it, there were some warning lights on the dash, but nothing that the team couldn’t fix. A short way into the introduction, the Car Wizard steps in to take over his show, asking Mrs. Wizard to return to her duties of filming the action.

The Car Wizard explains that his wife, who does the filming and editing on his channel, has been wanting a cool convertible. A friend found this 2004 Mercedes-Benz SL500 at auction and snatched it up for $5,500. Similar cars in great shape go for upwards of $10,000 on eBay, so he was concerned that there would be a long list of problems. 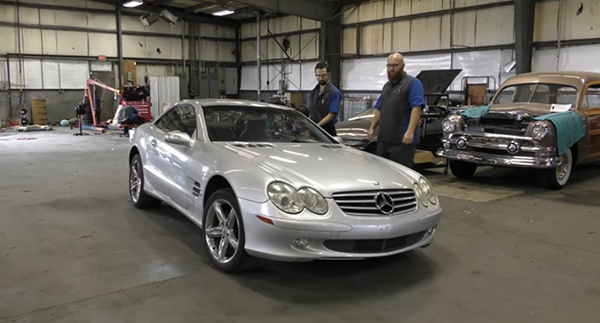 After the warning lights were all off, the Car Wizard took the R230 for a ride and was very happy with how it drove. With that in mind, he still had to do a thorough inspection to see if he really got a good deal for his wife. Before putting the car on the lift, he hooks it up to the scan tool and actuates all of the dampers, showing that they all work correctly as the Benz does a little dance.

Inspecting the Undercarriage
When the Car Wizard goes under his wife’s 2004 SL500, he immediately points out that the air conditioning components look good and the underbody pan is very dry. This suggests that there are coolant or oil leaks. As he continues to look around, the finds that the transmission is also dry and the exhaust system is in great shape. The driveshaft carrier bearing looks good and there are no leaks around the rear differential case. The axles are tight, as is the rear suspension, but it isn’t all good news.

The Car Wizard finds some play on the driver’s side front wheel due to a worn inner tie rod, but it isn’t bad enough to need replacing. The car sat for a long time before he got it from auction, so the brake rotors are all rusty. He plans to do a full brake job with new rotors and pads all around. He finds that both ball joints on the bottom of the front struts are bad, as are the motor and transmission mounts. He can press out those ball joints rather than replacing the struts and the drivetrain mounts won’t be a problem for him. 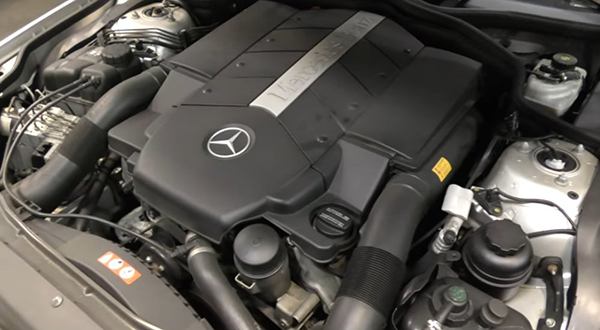 From the underside inspection, the Car Wizard found that there is nothing costly that needs to be replaced. Most of the problems mentioned are more of labor-intensive expenses, but he wont be paying for his own labor, so he only has to worry about the cost of these simple parts.

The Exterior Once-Over
Once the R230 was back on the ground, the channel host begins to examine the exterior, but he starts with a quick look at the engine bay. The 5.0-liter engine, which delivers 300 horsepower, is remarkably clean. The only real problem is that the hood struts are bad, but Car Wizard actually sells a simple clamp to hold the hood open, which he showcases in the video. 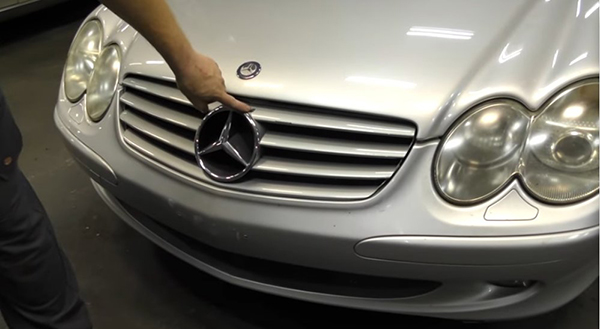 As he walks around the exterior of the 2004 SL500, he points out some light scuffs, scratches and dings, all of which will be easy to touch-up. There is no significant damage to the body and no sign of rust anywhere. He points out that the tires are very old, so they will be replaced, but he doesn’t care about the corrosion on the inner barrel of the wheels. He and Mrs. Wizard live on a dirt road and this is a cruiser, not a showpiece, so he won’t worry about the cosmetic aspect of the wheel barrels. 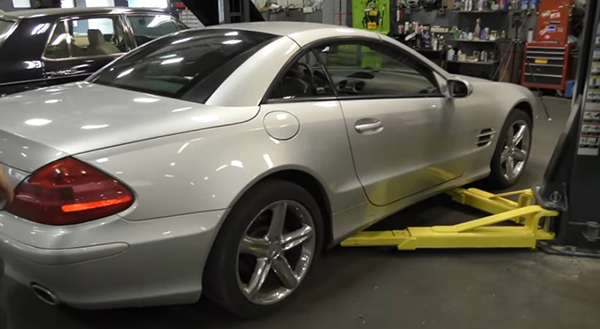 Few Flaws Inside
During the exterior walk-around, the Car Wizard steps inside to show us the luxurious cockpit. There are two issues, the first of which is that the driver’s seat stitching in the center of the base cushion has come undone and will need to be fixed. The other issue is that there is a button cap missing from the driver’s door controls and he doesn’t know what button goes there. 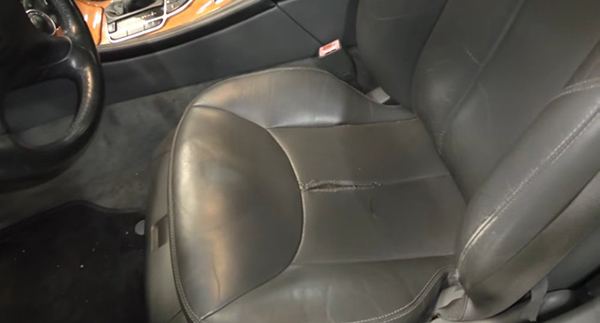 Other that those issues, everything else inside this R230 looks great. The dash pad looks perfect, all of the gauges work, the radio works and the passenger’s seat looks flawless. The trunk is a little dirty, but other than that, there is nothing wrong in the rear.

“I can’t say that I’m disappointed in the interior,” says the Car Wizard. “I’m very happy with it.”

Finally, many R230 convertible tops don’t work, so he has the same mechanic who fixed the dash light issues get in and operate the top. It goes down and comes back up perfectly. 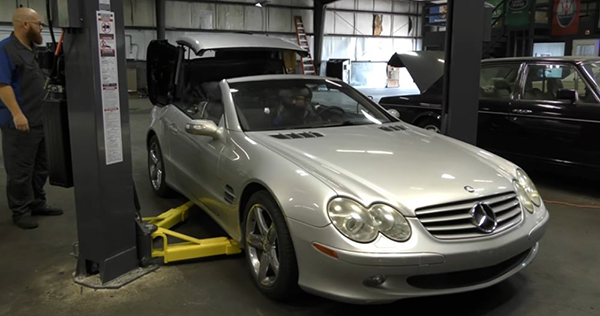 A Great Deal
Towards the end of the video, the Car Wizard asks Mrs. Wizard if she thinks that she got a cool car. He reply is “oh yeah, I’m liking it”. That alone is a win for any husband, but to go a step further, this car will only require basic parts to fix all of the little issues. At that point, this $5,500 purchase will be worth nearly twice that.

“For $5,500, I can’t complain,” says the Car Wizard. “Tthis is not a good candidate if you have to pay a shop to do your work”. If you are mechanically inclined and you are looking for a project car, this would be ideal. If you are not mechanically inclined, this is a “no no no no no car”. A shop would likely charge someone upwards of $4,000 for all of the repairs, so it would be better to buy a car without any flaws.