While the Germany-based luxury automobile manufacturer is not listed as a sponsor on the official FIFA 2022 World Cup webiste, they are seizing the opportunity to remind fans of the role they played in the 1974 World Cup held in their home country. 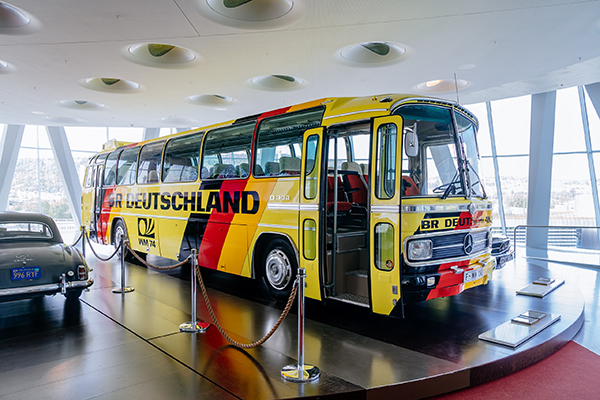 Close up: Automobiles, Architecture, and Exhibition courtesy of the Mercedes-Benz Museum gives us an inside look at the Mercedes O 302 coaches used to ferry the 16 teams throughout West Germany and West Berlin. Each of the teams were provided with a bus adorned in their respective colors while roof-mounted country flags waved in the wind.

The West German contingent used the No. 8/2022 302 bus decorated in the national colors of black, red, and gold for its travels throughout the tenth football World Cup that took place from June 13 to July 7, 1974. The 1974 World Cup logo “WM74” is prominenet on the back window and sides while the front and sides of the distinctive bus are emblazoned with “BR Deutschland” (FR Germany). Germany was still divided at the time and the German Democratic Republic from the other side of the “Iron Curtain” also played and used a bus that read “DDR” (GDR). The GDR would bow out of the tournament in the second round. 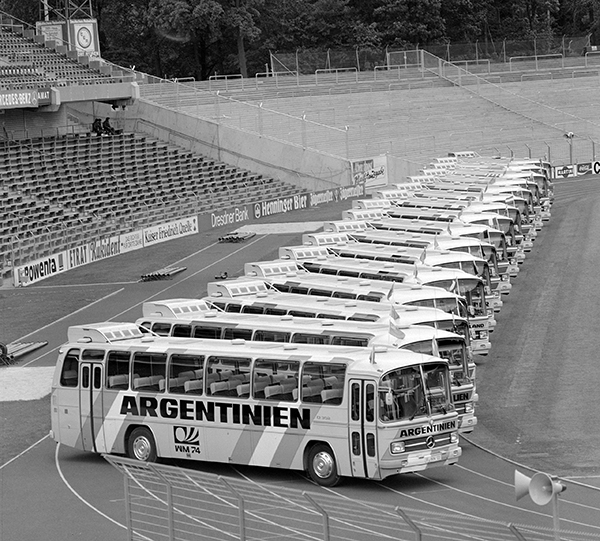 Museum visitors are able to board the bus to get a feel for what luxury bus travel was like almost five decades ago. Visitors will see first-hand the garish colors used back in the day with vibrant red and yellow seat covers and head restraints on each armchair. Another obvious sign of the coach’s vintage is the ashtrays at every seat and a fresh beer tap.

The O 302 was built from the spring of 1965 onwards and Mercedes-Benz maintained the standards of performance and even included “Thermo King” air-conditioning units for the first time mounted on rear portion of the roof.

The O 302 was a successful commercial model for the company and by 1976, there were over 32,000 assembled. Air suspension was once an option but became standard equipment beginning in 1971. Customers had four six-cylinder in-line naturally-aspirated diesel engine options ranging in output from 125 hp (126 ps/93 kW) to 236 hp (240 ps/176 kW). 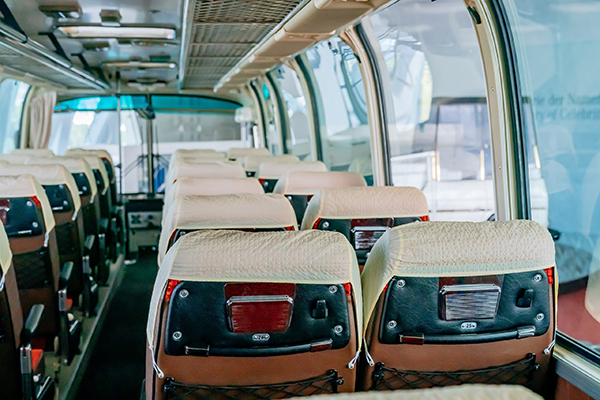 Home would prove to be sweet for the Germans as they secured their second World Cup win (the first in 1954) by beating the Dutch 2-1 on a game-winning goal by Gerd Muller. The fresh tap beer on the bus ride home was surely flowing amid the celebration.

At the conclusion of the World Cup, all sixteen buses were entered into commercial travel operations maintaining the same paint schemes. Over time, they slowly disappeared and a faithful replica bus now resides at the museum as one of its more popular attractions.