In August 1959, the company announced a thoroughly revised passenger car range. Under the slogan: “The new six-cylinders – in a class of their own” and as successors to the existing six-cylinder models came the following three completely re-designed models – the 220 b, 220 Sb and 220 SEb of the W 111 series. In addition to various differences in equipment detail, the three new models also differed in terms of their engines. A coupe version of the 220 SEb arrived in February 1961, and a convertible followed in September that same year. 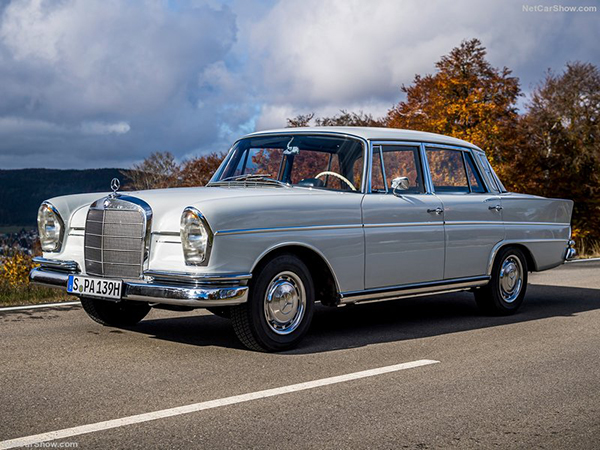 What the three saloons had in common, however, was an exceptionally spacious and elegantly styled body, the most distinctive features of which were its tailfins – a concession to the American influence on contemporary tastes. This characteristic design element would later give rise to the name by which the entire model generation came to be known – today the generic term “fintail” is applied to all these models. The new model series set new standards in terms of passive safety, for these were the first production cars to feature the Barényi-patented rigid passenger cell with front and rear crumple zones. Safety was also given top priority in the design of the interior. The new models had a padded instrument panel, for example, with yielding and in part recessed controls, as well as a steering wheel with padded boss. Also worthy of note was the first use in this form of safety door locks, likewise major contributors to safety in the case of accident.

From the purely external point of view, the 220 b differed in eight features from its two sister models. The 220 Sb and 220 SEb, which were identical on the outside with the exception of the model designation, each had an additional chrome strip to either side of the radiator grille, a chrome-plated air intake grille in front of the windshield, and chrome-plated wheel trim. At the rear the differences were rather more apparent. The two models with the “S” in their model designation had a chrome strip above the rear screen, an ornamental moulding to round off the trunk lid, larger rear lights with integrated license plate lamps, as well as additional bumper horns between the rear lamps and rear bumper. In addition, the tailfins – officially known as ” guide bars” – had ornamental mouldings not only to the rear end-piece but also to the upper edge. 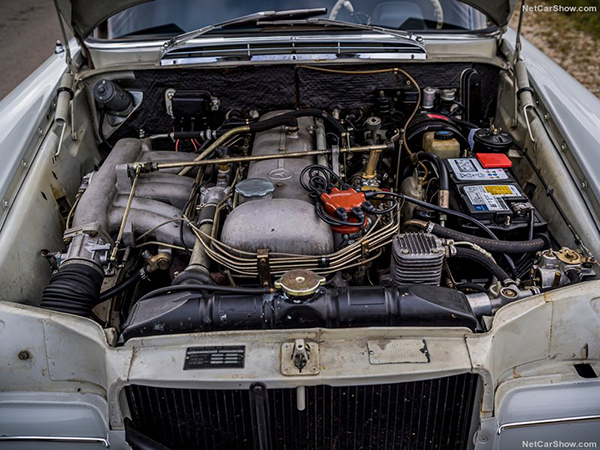 Tried-and-tested engines
The engines were to all intents and purposes the same as those of the predecessor models but with minor modifications. All three units had modified valve control linkage and a steeper camshaft. The 220 b engine was now fitted with two carburettors and delivered 95 hp (70 kW), 110 hp (81 kW) in the 220 Sb. The direct injection unit for the 220 SEb featured straight intake pipes and developed 120 hp (88 kW).

The running gear and brake system also largely came from the predecessor models, although the suspension had been thoroughly revised in certain respects. At the front, the subframe design introduced with the ponton-type models was retained, although the shape was modified to a simple cross-member design joined flexibly to the frame floor at only two points. At the rear, the tried-and-tested single-joint swing axle was fitted with a compensating spring, positioned horizontally above the pivot point in order to distribute axle load equally to both drive wheels. The shock absorbers on the front and rear wheels were now positioned right on the outside, a measure that not only provided more effective vibration damping but also improved accessibility.

During the production period the brake system underwent two modifications. First the 220 Sb and 220 SEb were equipped with disk brakes to the front wheels in April 1962. Then in August 1963 the same modification was added to the 220 b and the model was simultaneously equipped with a brake booster – a feature available up until that point only at extra cost. As part of these changes, all three models were also fitted with a dual-circuit brake system, which offered safe retardation of the vehicle even when one of the circuits failed. 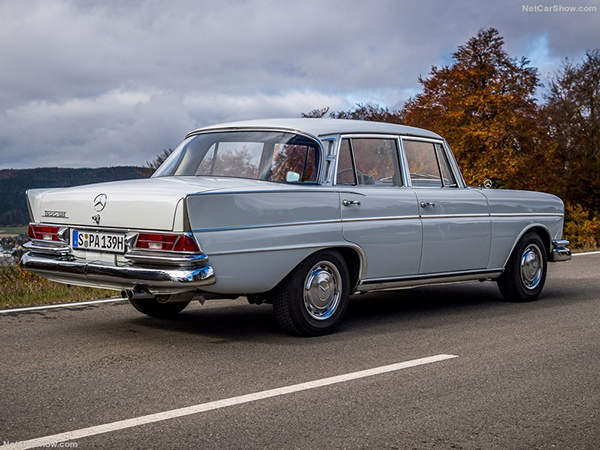 “Hydrak” hydraulic-automatic clutch
As with their predecessor models, the three new W 111 models were also optionally available with the “Hydrak” hydraulic-automatic clutch, although only until early 1962. After years of in-house development to reach production standard, a fully fledged automatic transmission was ready for use from April 1961, initially in the 220 SEb only, and then also from August 1962 upon order with the 220 b and 220 Sb – at an extra cost of DM 1,400. Unlike with the Borg-Warner automatic transmission available with the 300 c from 1956 and the 300 d successor model from 1957, the company’s own design did not use a torque converter, but instead relied on a hydraulic clutch. This had the advantage of reducing power loss. The downstream four-speed planetary gear train consisted of two planetary gear sets, three multi-plate clutches and three band brakes. 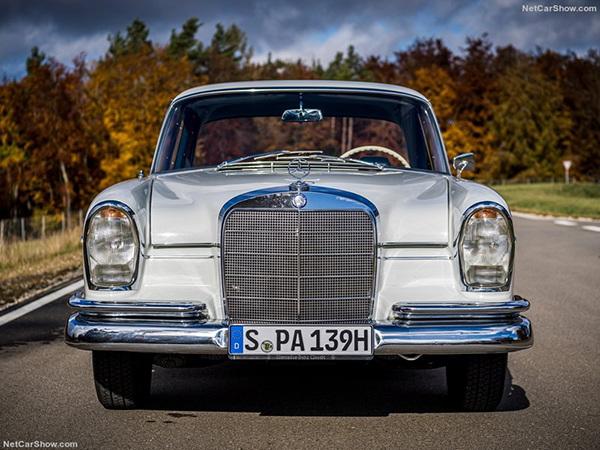 A new top-of-the-range model
In August 1961 the 300 SE was introduced as the new premium-class model, a vehicle which in terms of its external appearance and technical design lent heavily on the 220 SEb, but which also included numerous technical tidbits as standard. Coupe and convertible made their debut in February 1962. In addition to the four-speed automatic transmission and the likewise newly developed power steering, basic equipment also included air suspension – a first for a Mercedes-Benz passenger car – which offered a combination of sporty handling with top-quality ride comfort. The brakes represented a further innovation in the model bearing the internal designation W 112, since this was the first Mercedes-Benz production car to be equipped with a dual-circuit brake system as well as disk brakes at the front and rear wheels.

The 3.0-liter direct injection engine was based on the tried-and-tested unit used in the 300 d model, but it featured a light-alloy block with pressed-in cylinder liners and was approximately 40 kilograms lighter as a result. As with the predecessor model, mixture preparation was achieved using timed manifold injection with a Bosch two-plunger injection pump. In January 1964, the compression was raised very slightly and the injection system converted to a Bosch six-plunger injection pump. This permitted engine output to be increased from 160 hp (118 kW) to 170 hp (125 kW).

The body of the 300 SE was almost identical to that of the 220 SEb, but it offered more in the way of chrome trim. The most distinctive difference was the chrome strip in the lateral beading that ran from the headlamps to the rear lights; in addition, the 300 SE featured trim around front and rear wheel arches as well as a broad chrome strip beneath the doors. Less striking, perhaps, were the additional small “300 SE” plates integrated into the ornamental mouldings on the C-pillars. The 300 SE was also optionally available without these decorative elements. 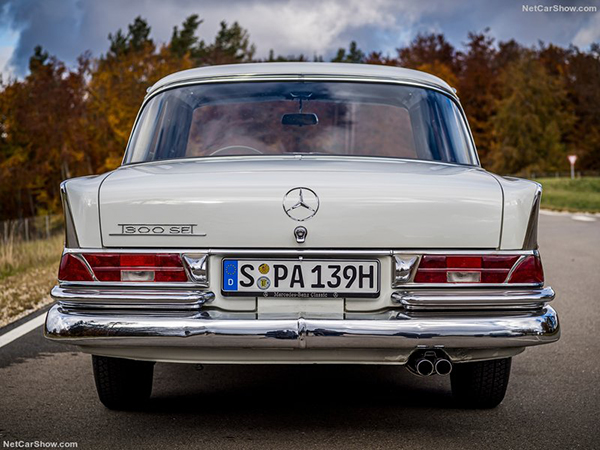 The advent of the long version
At the Geneva Motor Show in March 1963, the company introduced the long 300 SE version, which apart from its 100-millimeter longer wheelbase, was identical to the basic 300 SE model. The extra space served exclusively to increase legroom in the rear and the entry width for the rear doors. The long 300 SE was also optionally available with partition wall and electrically operated dividing screen. Apart from the difference in length between the 300 SE and the long 300 SE, an additional equipment detail made it easy to distinguish between the two cars: The long version had no ornamental moulding on the C-pillar since the through-flow ventilation was designed differently and there were therefore no vents. With effect from the introduction of the long-wheelbase version, both variants, the 300 SE and the 300 SE long, were also available with four-speed manual transmission; this reduced the sale price by DM 1,400.

In July/August 1965 production came to an end for the 2.2-liter and 3.0-liter models with “fintail” bodies. The successor models were the 250 S, 250 SE and 300 SE, which collectively belonged to an entirely different model generation. At the same time, the 220 b was replaced by the 230 S. In spite of the unusual model designation, the new model was basically a familiar face: The 230 S was to all intents and purposes identical to the 220 Sb, though with a revised engine. By boring up the tried-and-tested 2.2-liter unit and increasing the compression, output was raised by 10 hp (7.4 kW) to 120 hp (88 kW). Another new feature was the hydropneumatic compensating spring on the rear axle, which replaced the coil spring used up to that point and ensured a constant body height regardless of the size of the load. From the outside it was impossible to distinguish the 230 S from the 220 Sb – other than by casting a glance at the model designation on the trunk lid. 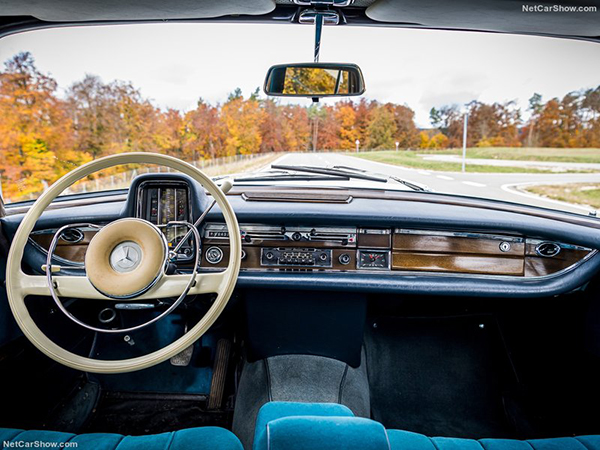 Even though the 230 S had something of the character of an end-of-line model from the outset, a total of 41,107 units were built prior to the discontinuation of production in January 1968, 341 of which were chassis for special bodies. One special version of the 230 S should not go without a mention: A station wagon, which was built at the Belgian firm of coachbuilders IMA on the chassis of the 230 S and sold through the Daimler-Benz sales organization from August 1966 onwards under the model designation “230 S Universal”.