At the time of its release, the M120 was the most high-tech powerplant ever produced by the German manufacturer. It was conceived for a luxury sedan, but after receiving the high-performance treatment from AMG, it became the heart of legendary supercars cars like the Mercedes-Benz CLK GTR or the Pagani Zonda.

The Story Of Mercedes-Benz M120 The Best V12 Engine

Although this mighty engine would hit the roads in the 1990s, the idea of building a twelve-cylinder that could be used in its flagship cars was nothing new for Mercedes. Throughout the 1960s, the company’s engineers developed a prototype 7.5- unit intended for the “Grosse” 600 Pullman. Offering it alongside the 6.3-liter V8 was considered, but management eventually decided that the eight-cylinder was more than adequate, and the prototype was shelved.

During the next decade, the idea was kept alive, and a 90-degree vee angle version was experimented with. However, the engine was plagued by various technical issues, so the project was eventually canceled.

In the early 1980s, engineers got back to the drawing board, coming up with a design for an innovative V6 that could be scaled up to twelve cylinders. This time, it looked extremely promising, but once again, Mercedes higher-ups decided that its models would fare well with the existing M117 V8.

That changed in 1985 when they found out that archrivals BMW were preparing to introduce the second iteration of the 7 Series, a redesigned luxury sedan that was expected to be available with a new 296-hp, 5.0-liter V12. Concerned that sales of its popular W126 S-Class would take a big hit, Mercedes rallied the troops and accelerated the development of the new S-Class generation dubbed W140, which was in the works since 1981. At the same time, the powertrain department was given the green light to create a new V12 capable of outperforming the Bavarians’ upcoming M70 mill.

The scalable V6 that was tested several years earlier was abandoned, as the engineers opted for a different approach. They based the architecture of the new engine on the proven design of the M104 inline-six, which was basically the same recipe that BMW employed to cook up its twelve-cylinder.

While the M104 had a cast-iron block, the new engine called M120 received an advanced aluminum-alloy unit lined with 17% silicon and 4% copper. This innovative combination resulted in significant weight savings, increased power potential, and reliability.

Inside it, a forged-steel crankshaft with seven mains was fitted. The iron-plated, zinc-coated aluminum pistons connected to the crank via forged-steel conrods could reciprocate in liner-free cylinders thanks to the high silicon content of the block.

Both the diameter of each cylinder and the distance between each bore were the same as those of the M104 six, which enabled engineers to use its 24-valve aluminum cylinder head on the right bank of the M120. For the other bank, they cast a mirrored version of the component and integrated variable valve timing for the intake cams.

The engine also received a motorsport-derived, multi-piece oil pan to prevent foaming, a Bosch LH-Jetronic ECU coupled to knock sensors that allowed it to guzzle up lower-octane gasoline without risking pre-detonation, and a gorgeous one-piece intake manifold. 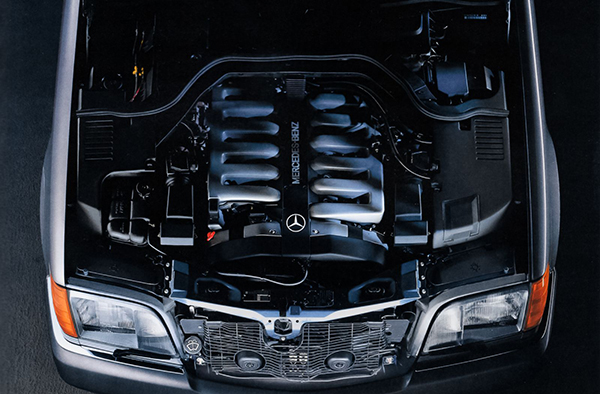 Initially scheduled to be released in the summer of 1989, the rollout of the W140 S-Class was delayed until the first part of 1991, in part because the top brass wanted to give the engineering team more time to perfect the V12.

BMW’s M70 was no match, and the only production V12s that could stand a chance against the M120 in terms of performance figures came from Ferrari and Lamborghini. It was so good that it was chosen by Horacio Pagani for his Zonda, one of the few novel supercars from the 1990s that managed to survive to this day.

Following the M120’s introduction, multiple tuning houses like AMG, Brabus, RENNtech, or Carlsson would enlarge the M120 and turn it into a monster, but the engine would achieve legendary status on track, courtesy of Mercedes’ long-time partners and future high-performance division, AMG.

The year was 1996, and Germany’s leading touring car competition DTM (Deutsche Tourenwagen Meisterschaft or German Touring Car Championship) had just folded. Left with no top racing series to compete in, Mercedes turned their attention to the BPR Global GT, which was scheduled to become an FIA-sanctioned championship in 1997.

The BPR was dominated by the McLaren F1, an iconic race car powered by a BMW V12 loosely derived from the 7 Series’ M70. Determined to enter the 1997 season and dethrone the McLaren-BMW partnership, the team of AMG and Mercedes engineers tasked with developing the new race car sourced a competition-spec F1 and fitted a thoroughly improved version of the M120 inside it. By doing this, they not only managed to reverse engineer the successful racecar but also test the new powerplant while the chassis and body were being developed.

Known internally as GT 112, the motor could spit out around 600 hp and proved to be extremely reliable. It helped the CLK GTR outperform BMW Motorsport’s McLaren F1s, as AMG-Mercedes secured both the Drivers’ and Teams’ trophies in their maiden season.

The beefed-up motor was codenamed M297 and enlarged even further. In 7.3-liter guise, it was built from 1997 to 2016 in a wide range of output versions that peaked at 789 hp and 664 lb-ft (900 Nm). Mercedes used the lesser, 518-hp M297 in their AMG-badged CL- and S-Class models, whereas the most powerful iterations replaced the M120 in the Pagani Zonda, powering every single version of the supercar (there were many) built from 2002 onwards.

The first V12 mass-produced by Mercedes-Benz was not only the best twelve-cylinder in the history of the company but one of the best engines ever built. It started life as the heart of the epic W124 S-Class, then became a race engine in the successful CLK GTR, and finally aided the Zonda’s transformation from novelty to one of the most appreciated supercars of the 21st century.