Mercedes-Benz unveiled the new 230 SL (W 113) at the 1963 Geneva Motor Show. It was designed as a comfortable, high-performance two-seater touring car and replaced the 190 SL (W 121) and 300 SL Roadster (W 198). The exterior featured clean, straight lines and the SL front with the large central Mercedes star. The optional hardtop with its high windows and the concave shaped roof supported by narrow pillars was reminiscent of Asian temple buildings, which quickly earned the W 113 the nickname “Pagoda”. The basis of the floor assembly were the Mercedes-Benz “tail fin” saloons of the 111 model series, the world’s first passenger cars with a safety body. This SL generation also benefited from corresponding contemporary research. 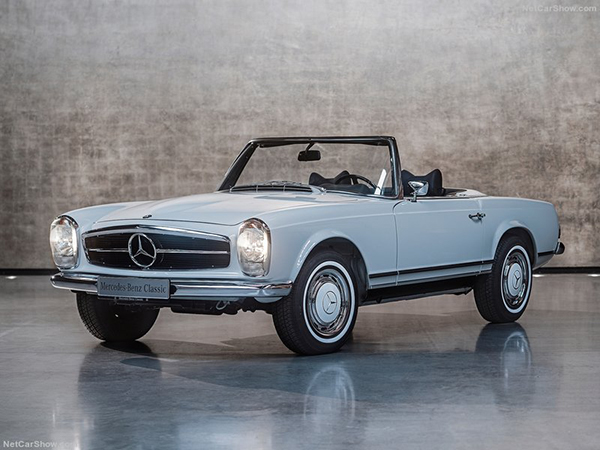 The chassis, taken from the Mercedes-Benz 220 SE Saloon, was tuned to the needs of sports- orientated cars. Its suspension was firm and, at the same time, atypically comfortable for a sports car of its time. The six-cylinder engine was also taken from the saloon, but modified for use in the SL. The engine, bored out to 2.3 liters, produced 110 kW (150 hp) and was a sporty power pack. 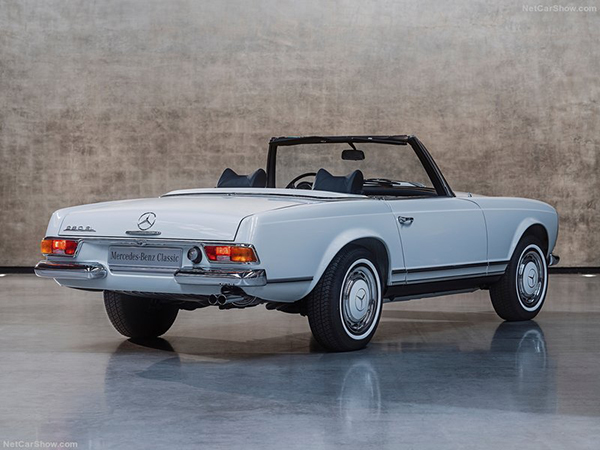 In 1967, the Mercedes-Benz 250 SL replaced the 230 SL. The changes were mainly to be found in the engine and brake system. The larger-displacement engine offered ten per cent more torque, making the 250 SL much more flexible to drive. In addition to the three familiar body versions (roadster with a folding top, coupé with a removable roof and coupé with removable roof and roadster top), the 250 SL was also available as a 2+2 coupe with a rear seat bench on request. Less than a year after its presentation, the 250 SL was replaced by the Mercedes-Benz 280 SL with a 2.8- liter engine and 125 kW (170 hp) output. From 1963 to 1971, a total of 48,912 “Pagoda” SLs of the W 113 model series were built.